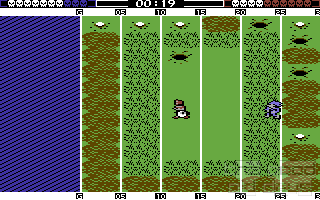 American Football with monsters - that's Grave Yardage. It adds elves, ghouls and wizards into the mix, and all of them are after an eyeball with legs - the stand-in for a ball. Points are scored the usual way: by carrying the ball all across the field. Or... by beating up the enemy players.

And that it basically where the real fun begins. Some types of players might be fast and agile, but they drop dead after one or two axe blows. Or the other way around. Some are smart, some stupid. Some deliver fatal blows, some can take those. Every time the game is interrupted by some event, you have the choice to change your team's lineup. You can hand-pick four players from your pool or just take one of the pre-made selections, optimized for strength or stamina for example.

For more variation, there are a lot of different fields to play on (adding such features as mines into the game), different teams and different 'playbooks' containing team maneuvers you can (try to) carry out. All of them are editable.

Good concept, but the game suffers from a few things. First of all, the graphics, while generally adequate, could make the different players more distinct. In the chaos which always occurs almost immediately, it's hard to tell them apart. Staying on the topic of graphics, the game doesn't scroll the field smoothly, but only at two pre-defined points. That means you'll sometimes be in a fight directly at the border of the screen, making things even harder. Even worse: The game always shows the part of the field which the ball is in, and it might happen that the real action is taking place off-screen (read: you're supposed to fight without seeing it).

Gameplay-wise, just like real American Football, the flow of the game is interrupted too often. Since players are beaten down fairly quickly and since there are only four of them, the game seems to be stopped every few seconds. Why don't the players just get up again some seconds after being knocked out? That way, the flow of the game wouldn't be interrupted. Instead, you have to stand quite a bit of loading time, then select the next maneuver, only to have one team knocked out again quickly. Unfortunately, the loading times exceed the effective game time.

Grave Yardage is still worth a serious try. Its humourous and anarchic edge certainly makes it a sympathetic game, even if the gameplay could have been balanced a little better. 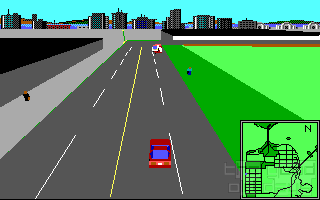