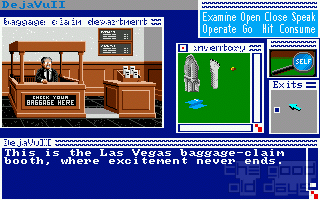 This time, the player indeed gets a deja vu: This sequel is so similar to its predecessor that it's hard not to get some flashbacks. You're even going to visit some of the old locations and meet some of the old people again! That doesn't mean it's a useless game only to make profit off its 'good name', but without anything new. It is just a sequel in a very strict sense: it picks up right after the first part.

"Ace" Harding has sorted out his trouble with the police, but the other 'fraction' of the affair isn't all that happy with the result: local mafia-type gangster Tony Malone wants to have his 112000$ back which were somehow 'lost' in the death of Joey Siegel. He believes Ace has something to do with it, so he kidnaps him and gives him a week to return the money. If he doesn't succeed, it's "or else". Running away isn't an option either, because one of Malone's thugs is on Ace's heels.

After the disappointing Shadowgate, Deja Vu 2 is a huge step back into the right direction. Game design is centered around real puzzles again, and not carefully avoiding ridiculous and deadly traps. Gameplay-wise, this is probably even Icom's best game. This, together with the fact that it's quite a bit longer than the first part (and that without screwing it up!) and the more colourful graphics, would have earned it a bonus in the rating. If it weren't for the story. Don't get me wrong, the story is good! The 40s crime atmosphere works great and some of the twists in the plot are quite interesting. It's just that the psychological aspect of amnesia in the first part was even better! So this is where Deja Vu 2 loses its advantage again. It really depends how one weighs the different aspects, if story isn't that important to you, this certainly is the superior game.