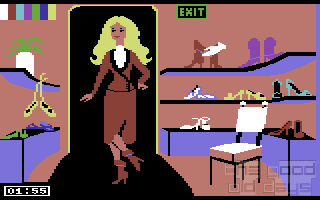 A game simulating the life of Barbie... what an amazing idea! Her boyfriend Ken calls and asks her out on a date. He might want to take her to the beach, to the gym, to the prom or to a restaurant. Of course, Barbie agrees. Now, she has one hour to choose the right look for this occasion.

So she jumps into her car and goes shopping. There are several fashion stores selling dresses and shoes as well as a hairdresser in her neighbourhood - very convenient. The player can choose not only the dress components themselves, but also customize them with different colours.

If you think you've found the right combination, you drive Barbie back home. And what happens there? The idiot Ken doesn't show up, but instead calls again - apparantely, he has changed his plans and now wants to take Barbie somewhere else! Once again time for a re-dress. Seriously, I never suspected you girls have such a tough time with us guys. Shopping for shoes and dresses all day - it must be hell.

And that's the whole game. Dress Barbie up the way you like. Which is appropriate for a game which has a dress-up doll with brushable hair as its topic. However, the novelty wears off very quickly. Sure, some people might find it funny to send Barbie to a romantic candlelight dinner dressed in a Bikini or to the gym in an evening dress. Once. But that's it.

From a technical point of view, the game is interesting because it features digital speech. Make sure you turn your sound on, because otherwise, you won't even know where Ken plans to take Barbie. Very nice from a historical point of view, but obviously not too impressive these days.

As strange as it may sound, but this game actually makes me wish Barbie would just say no to that jerk once in a while. Come on, girl, get a life on your own! 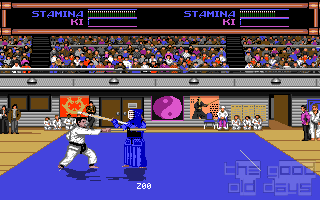