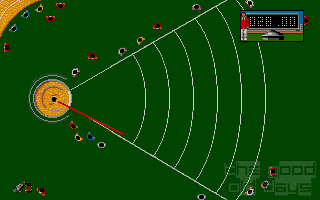 If there is one genre which really screams '8 Bit', it's probably the joystick waggling games. You know, those sports games which actually required you to train your muscles - and which killed your wrists and destroyed your joysticks. International Championship Athletics is a total anachronism: It's an Amiga / Atari ST exclusive, yet it still follows that (by then) ancient gameplay principle. 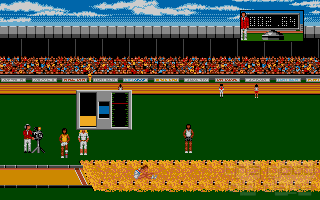 Hey, that's about as good as I actually did in 3rd grade!

The game offers an unprecedented number of 16 athletic events. There is running (100m, 200m, 400m, 800m, 1500m and 4000m), hurdles (110m and 400m), throwing (hammer, javelin, shot and discus) and jumping (high jump, pole vault, long jump and triple jump). Many of them are the same gameplay-wise, and most of them involve waggling the joystick. The prime example being the sprint distances (100m - 400m): Your waggling determines your avatar's speed. Waggle better and you run faster. To paraphrase fellow crewmember Tapuak: Your joystick will be reduced to rubble after 300m - at the latest.

Longer distances don't include any waggling at all. Instead, you set your speed while having an eye on your energy bar. The faster you run, the faster the latter will be shrinking. If it is depleted, you'll just break down. So basically, these events are just trial and error: once you've found the right initial setting and the rough estimates when to change it and how, you'll win every time.

Throwing stuff is somewhat managable, with the waggling being used to pick up power and well-timed presses of the fire button to let loose. Jumping works in quite a similar way. Finally, the hurdles discliplines offer a welcome change from the waggling. There, your character runs automatically, leaving you to trigger the necessary jumps.

Obviously, joystick waggling isn't exactly thrilling, but in this game, it's actually the highlight. All the events which don't have any waggling simply aren't challenging at all. Hurdles require five minutes of practice, the longer distances are just trial & error. If I had to recommend anything, it'd be the throwing events, because the waggling isn't quite a brutal there and it's coupled with some timing. Still very simplistic, but the best you can get in this game.

Adding to the overall impression of anachronism, the graphics are especially tacky. The events themselves are presented in a decent 8 Bit look (anachronistic, but alright). Any screen in between seems to have been designed by some intern, though. In the whole game, there is exactly one face, and that is used for the announcer (worst talking animation ever) as well as all the spectators (male and female). The sound is limited to a cheap melody on the title screen and after that, just ooohs and aaahs after each event. 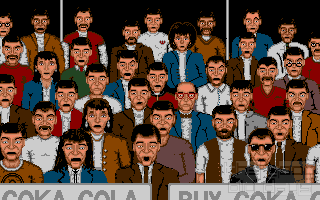 It should be noted that although the game was released in 1991, there are various indicators which suggest it was developed a lot earlier. The most obvious sign is the inclusion of the German Democratic Republic in the country lineup - a country which ceased to exist in 1990. In a bizarre design move, the player can choose the country he will compete for - and that choice also determines the game's language. So if you want to play the game in German, you have to compete as a member of the GDR team. Likewise, if you want the game texts in Spanish, you have to compete for Spain. And if you want to have everything in English, you can choose between Great Britain and the USA. The USSR is present in the game as well (phew, it did exist until December 1991...), but not as a playable nation - obviously, the developers didn't have a Russian translator. How hard would it be to keep the choice of game language and country apart?

All these strange details give the game a funny edge which actually works in its favour. It wouldn't stick in memory just for its simplistic gameplay alone. The announcer does. Which tells you more about this game than you need to know. 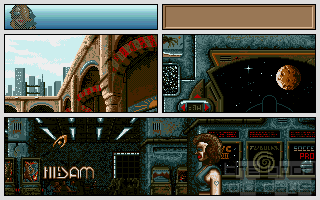