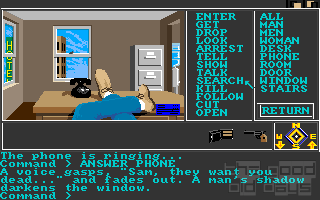 Sam Harlow - Private Eye. It all begins with a quiet day at the office when the phone rings. 'They want you dead', a voice gasps. And how right that voice is! Two thugs are already hot on your trail. And even after you manage to escape those two, that wasn't the end of it: Your ex-wife has been kidnapped, everybody who tries to help you is assaulted and even more bad guys are after you.

Borrowed Time is a graphic / text adventure hybrid. Each room is accompanied by a first person view on it and commands can be constructed using the mouse and two lists: one for verbs, one for objects / characters. Pure classic text interfacing is a possibility (actually, the prefered one) as well and the graphics can be turned off for faster loading times and to get more space for the texts. 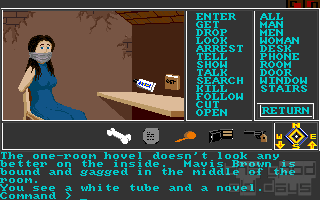 Finding a hostage
What makes it hard by today's standards is that there isn't any slow, introductory first stage in which you just walk around getting familiar with the setting and the people. It throws you right into the action and makes wasting more than a few moves instantly fatal. Later, after getting rid of the first two pursuers, it will still happen quite often that another baddie turns up out of the blue and just unloads a few bullets into your body. A very unforgiving game. On the other hand, the same danger works in the game's favour: There is a constant sense of urgency to your investigations.

That aside, Borrowed Time is a very solid private eye / gangster mystery. Even if the story is (in typical manner of the time) not too elaborate, the classic pieces of which make good 'hard-boiled' detective fiction are all there. In addition, the parser is quite good and the graphics shine whenever a person comes into view. Sometimes, the simplest ingredients can make for a tasty recipe. 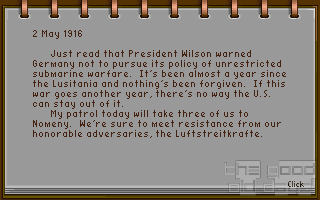