The Quest for the Holy Grail
for ZX Spectrum 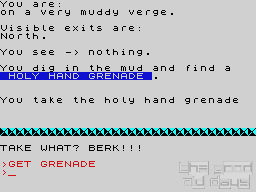 The Quest for the Holy Grail - a classic movie of epic proportions. Even though I've been able to quote virtually the whole movie from memory for years, I still watch it all the time, and each time, it cracks me up (the Political Peasants scene got me through some pretty bleak times back at university). This, unfortunately, can't be said about this game.

In an attempt to recreate the movie, some scenes will seem vaguely familiar. You'll meet the three-headed knight, the Knights Who Say 'Ni' (just that they say something different here), come across Camelot and (hopefully) find the Grail in the end.

The main difference is that the game isn't fucking funny! Which is the worst thing which can happen in such a Python related game. It has to be the most 'empty' game ever made - 99% of the game's screens are completely useless. Nothing can be found there, nothing ever happens there. They just take up time and make moving confusing.

Which, on the other hand, seems to be required, because gameplay-wise, there are something like five puzzles in the whole game. Those wouldn't last long enough. Even though the parser sucks pretty badly, making you guess the 'correct' combination of words and items are hidden in a completely non-visible manner at times.

To destroy your last hopes, don't count on the graphics to improve anything. The images accompanying some screens look really cheap and they scroll away once you enter any command (usually, in text adventures with graphics, the part of the screen showing the images isn't affected by scrolling - which makes sense).

Quite frankly, even writing all this isn't really fun. This game is just annoying. It's not “so bad it's good”. Get it for your Python collection, but just put it somewhere safe - don't even think about playing!

Mr Creosote:
The reason the movie still works is that so many people can relate to the scenes. And that is because they deal with archetypes. Everybody knows somebody like Denis the peasant or like the Black Knight - and the absurdity is just captured so incredibly well.
Wandrell:
All this from The Quest of the Holy Grail. That film is undoubtely higly politiced. Now we should start looking for hidden meanings and complex subliminal messages.
Mr Creosote:
Originally posted by Wandrell at 17:33 on July 2nd, 2009:
And if it doesn't work for people who are making money, I don't know what would some students expect to achieve. Too often they forgets they are students, they don't make money, they can't make any real damage on a society that revolves around money.
Actually, I disagree there. My university revolved around engineering. There is an obvious interest of 'the society' as well as companies to have qualified engineers. So even accepting the premise that only money counts, I think students could be a very influential group - if they stopped all the fighting amongst themselves. As I said: People's Front of Judea versus Judean People's Front.
Wandrell:

Protests won't be noticed if you made a barricade, cover it on fuel, burn it, burn the nearby cars and then hunted down the city buses just in case people still could travel through the zone. Once the protestors start fighting policemen, then at least the news will come.

The shipyards on my city (the few left) have quite an experience with these things. Not that it matters as it won't make a shinking company suddenly have money to keep them all.

And if it doesn't work for people who are making money, I don't know what would some students expect to achieve. Too often they forgets they are students, they don't make money, they can't make any real damage on a society that revolves around money.

I was never in politics - I'm only talking about university politics, i.e. student council activities and so on. Obviously, the situation will be different in different countries and at different universities, but I can say that I made it to the top there without ever being member of any party or group. I was involved in founding two (by bringing the respective people together) and one year, I helped write a programme for the a third one, but I never belonged to any. In fact, they pretty much all hated me, but I still managed to get elected each and every time I ran

My personal policy was always that everyone should check their personal political views (about general politics not related to university) at the front door in order for all the groups to be able to work together for the sake of the students. However, that was where many people just couldn't agree - because "everything is related to university", "everything is political", "purity of views is more important than results" and so on and so forth.

Just one example of what I went through: Once, there was a serious discussion (which lasted more than an hour) about whether setting fire to cars would be a good idea for protests to get noticed. It's unbelievable how far detached many people are from the so-called 'real world'!

I never got into politic groups, my parents were on politics some times on their life and it always was the same. The chiefs trying to keep the people under them, everybody else trying to climb. Political parties are not about politics, but about your standing in the party.

Also, the people mixed with these thing I met (all commies, which are the ones backing students and workers) had some childish vision about politics, and also were always quite young. But that may be because most people care even less about politic as they grow up.

But it's not surprising, the two big parties are basically the same (Left wing: we are the best because we think for the masses. Right wing: we are the leaders so we are better than you), and the smaller ones get into nationalism (that here in Spain means considering your region something apart from the nation). And one of the most absurd things is seeing publicity of the communist party with a teenager saying with the regional dialect you will lose your job.

Same here in 'general' company. However, at university, the weirdest people suddenly come together and since basically nobody else is even remotely interested in university 'politics', they can get pretty noisy or even dominant.

It's not necessarily the communist or anarchist ideology, but it's a certain type of person who will just turn the most trivial question ("Who lives in this castle?") into a political debate. Because, you know, everything is political.

I've sat through countless meetings exactly like those of the PFJ, wasting hours and hours listening to completely off-topic 'speeches' about 'the system' in my days. I doubt any sane person can stand this without being burned out very quickly. But yes, those experiences made me appreciate the Political Peasants as well as the PFJ scenes all the more - the realism is just breathtaking!

Here making communist comments will just make you look childish. And ironically the communist party (or the bunch of splinters they have, or whatever weird thing mixing nationalism and communism they are now) tries to sell itself to teenagers.

Mr Creosote:
Feel free to share anything about The Quest for the Holy Grail (1984) here!
[Reply] 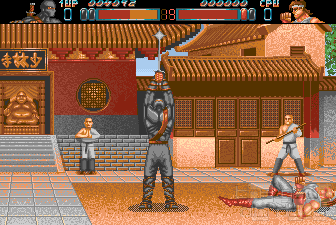