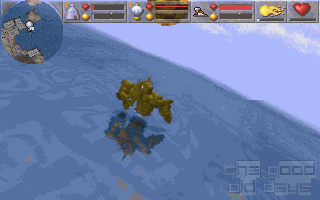 There are only so many excuses for 3D shooters. Magic Carpet at least has a tiny bit of originality: You're a sorcerer flying around on a magic carpet (oh, really?) trying to take over the world. This works by collecting mana and storing it in your fortress. Once you've collected enough, you can proceed to the next level.

Now how is this a shooter? Mana can only be harvested by killing creatures first. These creatures (giant flying worms, giant bees and so on) defend themselves, of course and there we are: standard shooter stuff. Just that instead of new weapons, you collect new magic spells. Which is effectively the same. 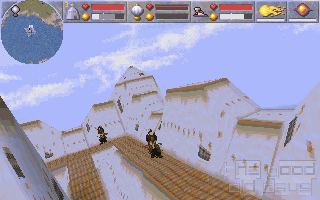 It gets more interesting in the levels where there is another sorcerer. There isn't enough mana for both of them, of course, so the fighting between them starts. They can shoot each other again and again, but what's more effective is attacking the rival's fortress (where all the mana is stored). Depending on how well that fortress is defended (and whether the other sorcerer is there to defend it, too), those attacks can turn into quite epic battles.

Some special features make the levels more varied and interesting. Some islands are inhabitated by humans (who might be a threat, too), forests can be burned down, gates provide teleportation capabilities and of course, new spells are usually located in hidden spots or at least well-protected areas. 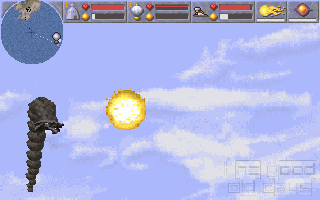 Graphically, the game is certainly well done. As a total curiousity, the game came with red / green 3D glasses which you can use combined with a special graphical mode tinting the graphics in these colours so that they appear to have depth. Which, of course, doesn't really work and it's just silly. Still, a funny option.

The small (but at least existing) tactical elements are what lifts Magic Carpet above the regular competition. It's a fun game - just the right thing for a short break from the more serious, deeper games.

I played this one a lot. The 3D Mode is indeed useless. But from the technical point of view the graphics engine is very good for such an "old" game. I couldn't play it in high resolution at the date of release because the system requirements where extremely high for high res mode.
By the way. In multiplayer mode it was more a tactical game than a shooter because human oponents allways attacked the ballons who carry your hard earned mana to your castle. So you had to protect them and exterminate you enemy.