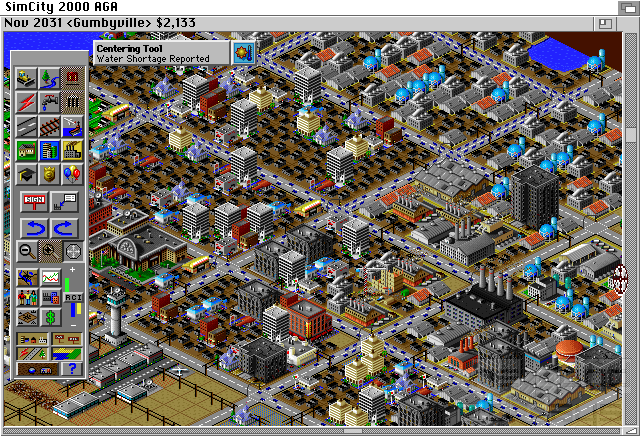 Sim City - father of the whole sandbox genre, i.e. games in which the player just builds something without a final goal. In this case, you build up a city from the perspective of a mayor. That means, apart from a few central functional buildings (e.g. power plants) and roads, you don't actually build anything yourself. Industry, residential and commercial zones can only be declared and depending on several factors, they'll be used or not.

A fairly run down commercial and industrial district

Part 2000 of the series introduces quite a few improvements which make things more refined and realistic. Zones can now be of any shape and size and they can have two different densities (e.g. scyscrapers versus suburban homes). Electricity can be produced using additional means (e.g. water power) and it isn't the only supply buildings require anymore: You also have to take care of water (though there seems to be a bug there... people still move in without any water supply). Public transportation also has taken a step forward. In addition to regular roads and railways, you can build highways and subways.

Amongst the administrative issues you have to decide about, there is taxation. You can create a fairly detailed list of taxes for different types of industry - for example to attract 'clean' industries and let the ones who are polluting the air pay for it. Likewise, you can try to attract inhabitants by offering services like free health care. 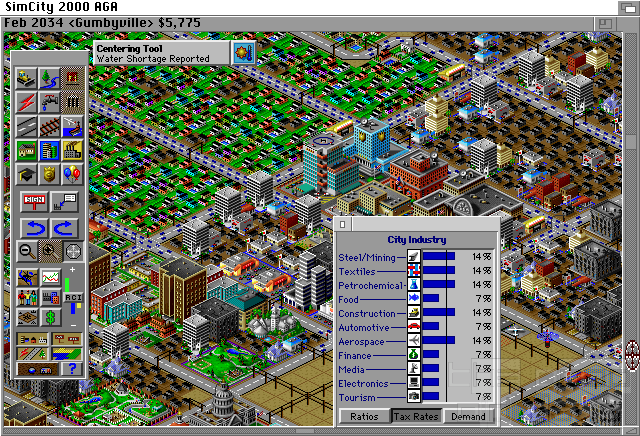 My real-life employer wouldn't invest in this city...

The game's primary strong point is the way the city comes alive on the screen. You actually see the buildings in a not too abstract way and something is always moving. You get newspaper headlines which offer some indication about your progress. You've got advisors (with real faces) telling you what they think should be done (with a certain amount of prejudice, of course). This makes it fun even just watching your city grow (which happens provided you've laid the appropriate basis) and 'live'.

In the sandbox genre, Sim City 2000 is one of the best. It's great for people who just want to build and plan carefully, always optimizing transportation and take care of all these questions. Players who get their sense of achievement from challenges, though, might not feel at home here: After the first few thousand people have moved into your city, you'll basically never have problems with money again. And after that, it's just a question of how to build and not if.

Mr Creosote:
Actually, I think this is one of the few games where bugs and rule misuse don't matter all that much to me. In most games, I actually cannot resist taking shortcuts, abusing strange behaviour etc. But since optimization has never been a big goal when playing Sim City, it just never crosses my mind here.
Herr M.:

RetroBunny:
Quote:
Back in the 1980s and early 90s, the original Sim City had grown to be a very popular household brand name. Many people loved Sim City. It had been released on the Macintosh, IBM's PC, Super Nintendo and many other consoles over the years. So, when Maxis set out to create "Sim City 2", the developers knew they had to meet some huge expectations.

Mr Creosote:
That screenshot shows a historically grown city. I usually follow the approach to leave some room between the power plants etc. And the first residential areas. Later, I will fill this space with industrial zones. To get started, I need some long pipes, though. That is what you see - and you also see there is nothing like that anymore in other directions, of course.
ZeldaDoritos: 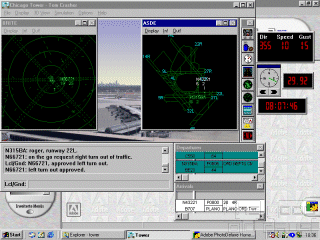