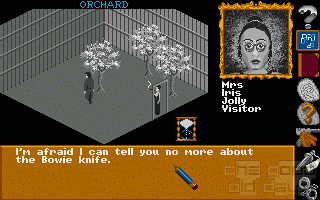 Detective Adventures may not be the most common genre, but they do exist (especially here on this site). All of them are somehow linear in their story and limited in their puzzles. All but one: Murder.

1941. You're a guest at a party where a murder is committed. Being a detective, it's up to you to solve the crime. This is done by questioning the other guests, the personell and the host, identifying the murder weapon, looking for fingerprints and other clues. When you think you've found the right suspect and you think you know how he or she has done it, you can officially accuse this person. With this, the game ends - successfully, or with the public shame of failure.

The speciality of Murder is that no game is alike (the manual talks about 3 million cases). Everytime you start a game, some randomizer functions decide how the mansion in which the game takes place is laid out, who is going to be the murderer, what the motive is and so on.

While this makes the game extremely replayable of course, the downside is the lack of a really refined story. The questioning of the characters (which is done by a really comprehensive system which makes it possible to ask people about other people, places, objects or a combination of any of those) can get a bit tedious when most people don't really have to say anything about most topics.

For players who actually enjoy games of logical deduction in the best style of Sherlock Holmes without the need of an extra thrill, the harder levels are especially interesting, because they provide a real challenge. It's more than just comparing people's fingerprints with the ones on the nearest weapon then, but you have to filter out the truth from what everyone's saying. If you know the board game Cluedo, you'll probably think of this game as a more complex and less static version of it. Definitely worth checking out!

Moebius:
Hm... this looks peculiar.. reminds me terribly of the Movie game on Spectrum. Might as well review that soon, and i think you might also wanna add it to comparison list later 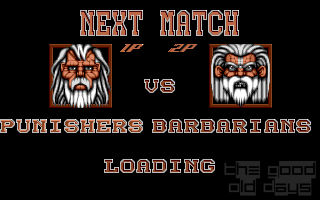