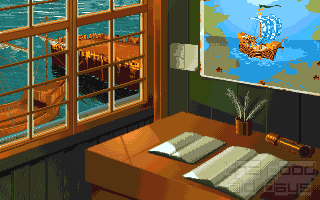 The late Middle Ages: The Baltic Sea are is ruled by the Hanseatic League, an alliance of flourishing cities ruled by a class of wealthy merchants. As an aspiring merchant in any of those cities, each player tries to build up a trading empire by sending out ships, buying and selling goods and establishing offices in as any cities as possible.

This trading is committed in pretty much the standard way. Goods can be bought cheaply is certain cities and sold at a profit elsewhere. A good overview of what costs how much where is the main prerequisite for success. The second one is diversity, because the local prices change according common market laws: increased demand (i.e. if you buy the same stuff all the time) leads to higher prices, increased supplies (i.e. if you deliver the same stuff all the time) leads to lower prices.

The Patrician doesn't stop here, though. The actual goal of the players is to get into politics. The first step is to become mayor of one's home city. To stand a chance in the regular elections, the citizens can be convinced by virtue of donations, care for the city's safety (players can 'donate' ships to defend the city against pirates) or impressive festivities. And after becoming mayor, the title of the head of the Hanseatic League is already waiting...

This additional political level (combined with a well done trading part) makes The Patrician a very recommendable game. It's also very well suited for less experienced players due to its great graphics and easy controls.

The only actual complaint: The game ends after a fixed number of years with the player's death. Probably not enough time for inexperienced players to achieve political power, and a fairly arbitrary way to cut off the game against the player's wish. The late merchant's children (if present) carrying on (with a few setbacks concerning the trading and the political popularity) would have been the better option.

Another welcome addition would have been an option to automate at least parts of the trading. For example, it isn't possible to apply regular schedules ('sail to Novgorod, pick up furs, sail to Hamburg and sell there') to ships. Instead, the player always has to manage everything 'by hand' which can get fairly tedious in the later game.