Realms of the Haunting
for PC 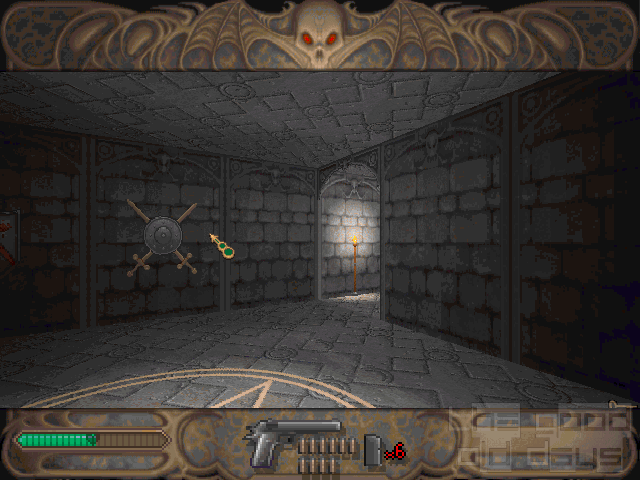 Ok, you have a dream of your dead father asking for help, then a weird guy gives you some obviously (yet broken) magical amulets, and when the morning ends everything makes you think you must pay a visit to the obviously haunted mansion. I smell genius behind this story.

And to top it all this is a filmed cutscene, real actors and voices. Hell, I'll be expending more time deinstalling this game than having fun with it. Or that is what you would think from experience.

But this time something is different, for some reason the story is great (well, a great atmosphere and a nice story) that goes about multiverses. Maybe you know the drill, there are several interconnected worlds, being all part of some metaphysical scheme where reality is formed by the sum of people's minds.

This won't make the story end like the Invisibles or a Philip K. Dick's book, as I said the story is nice, but doesn't stay far from “let's save the world from the big and powerful bad guy”. Really, sometimes the background of the world seems so badly used that I thought that the game was rushed or based on a pen and paper RPG. Mostly by the end, but that part is obviously rushed.

I was saying, it goes about the multiverse and a cult that studies the ways to travel through it. Nice, with touches of originality and in general much more story than you would expect on a shooter. Right?

Well, it's really more of an adventure game, you explore the mansion, the corridors connecting the realities and these worlds. There are times when you must fight, but the game is mostly about finding your way, and the shooting part is pretty light, including powerful mystical weapons that slowly recharge themselves.

Really, they wanted to stay away from shooters, and there are some nice touches to show it, like interesting dialogues with your companion or the characters you find, or the maps.

When you arrive at a new location usually you get a map. That's all you have to find your way, open the map, compare the landmarks and learn to orient yourself. Tiring you say? Well, I found it great.

In the end, the game leaves a nice taste, even if it is a simple game. There is plenty of action, but it's mostly about exploring variates places, it has a few flaws, but still it's a great game.