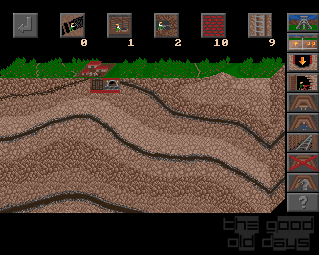 Coal mining: an industry living 100% from subsidies. Here in Germany, they only stopped training new miners quite recently, i.e. until then, they let people go to their doom job-wise by pretending this still has a future. Unbelievable! Obviously, there were different times, too. 100 years ago, coal mining became the backbone of the industrial revolution. And that's the time this game is about.

Black Gold came out shortly after Winzer and veteran players (are there any?) will feel right at home: Lots of text menus and statistics accompanied by somewhat amateurishly drawn small pictures representing the current location (though some digitized photos appearing between turns look good); icons with unclear meaning; an inconsistent structure of screen changing (sometimes, there is an icon for it, sometimes, you have to right-click and so on).

Barely scratching the surface so far
The game goes deep into the matter at hand. The players not only have to organize the whole process of mining, storing and selling, but they have to take care of many details and routine processes themselves. I.e. it's not enough to buy some land, the necessary equipment and get some workers - tunnels have to be dug, exact spots to mine at have to be selected and even routes for people carrying the coal outside have to be planned. And all that happens every turn.

This swamps the game with a large amount of routine work. It's not quite clear why such repetetive tasks can't work at least semi-automated. On the other hand, it's not like the game has a lot to offer aside from that. Expand, watch the market developments in different countries - the usual. A few random events (illness of workers,...) spice things up a bit at least. In the end, Black Gold is fairly dry business, though. A little better than Winzer, because it's at least a little more challenging, but not by a large margin.

Black Gold sends the player back to the golden age of mining in Germany.

You can select up to four players (human or three computer-controlled ones). After that, you select your goal. This can be a certain amount of cash, playing for a specified time or digging a number of mines dry.

The game begins in city view where you can find a bank, a coal dealer, a coking plant, a wholesale dealer and an employment bureau as well as access to your mine.

Apart from the option to receive a credit from the bank, you can also invest money (and receive interest) there, and sell your coal (there are four kinds of coal as well as coke) all over the country as well as abroad through the coal dealer. You can also sign longer-term contracts. In the coking plant (if you bought one), you can turn your coal into coke which will sell for a higher price than the coal itself. The wholesale dealer offers everything you will need to mine coal. Apart from lorries, tracks and supporting beams, there are drills, shafts, dynamite and equipment for the workers. The latter can be found in the employment bureau where each month (= 1 turn), a different number of unemployed workers will offer their services.

Without your own mine, you will not be able to do anything, though. After you've bought a piece of land, you can have your winding tower drill downwards. For this, the game changes to a slice pane view where you can see black lines running through the ground in several places. This is where you can find the Black Gold. To retrieve it, you have to dig an adit to dig in. The deeper you dig, the more you will be paid for the coal.

While digging, you have to be careful to support the lowest level with steel beams (tracks are another advantage). If more than 20 spaces above this are empty or have just been filled up with wood, accidents can happen. You can lose coal this way, workers will be injured and you will lose your equipment. To prevent that, you can fill up empty space with sand. Though this only works with the right supporting equipment, digging from the bottom upwards and supporting the topmost row with steel beams and tracks as well.

To retrieve the coal from the depth of the mine, there are different methods. The most effective one is through lorries. Starting with 1910, there are locomotives which can pull more than one lorry at once, so you will need fewer pullers. Until then, you can use horses. If you dig more coal than you can transport, the surplus is lost. If you don't have enough storage space for the coal, the surplus is lost as well.

If you have done everything, you enter your home and end the turn. What follows is possibly a special event (finding a wallet, mistakenly delivered goods etc.) and then the breakdown of how much coal was banked. Then you are back at the city screen where you can either sell your coal or deliver it to the coking plant first.

Unfortunately, many of these tasks will become repetitive and boring over time. You cannot automate anything, so you have to do the same clicking repeatedly. There is the option to throw a party for your workers or pay them a bonus in order to improve morale (this is meant to reduce the number of sick days), but it does not really work.

For players who want to get rich quickly, there is actually an alternative to banking coal: trading equipment. The prices change every month. So you can buy some at 28 Marks in January and sell it again for 40 in February. Then, invest your money in loans and once you reach 1910, you will have a couple of million on your account and just for the interest alone, you can easily finance a full fledged mine.

The graphics have been kept simple, this is how it used to be almost 20 years ago.

If you are looking for a simple, but nevertheless good economic game, you can safely give this one a try.

Black Gold sends the player back to the golden age of mining in Germany.