The Legacy
for PC (DOS) 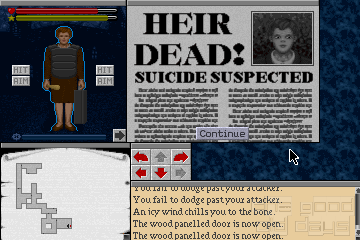 A haunted mansion that looks more like a maze, lots of monsters and both of your fists. What else could be needed for what basically is a dungeon crawler on a lovecraftian setting?

Maybe more people. Having just one character is a draw-back, but just for the carrying capacity. Everybody knows dungeon crawlers are all about fighting, but trying to hack with four different guys at the same time isn't always well handled.

So no need to worry about those combats where half your party is waiting for the mage to cast. Here you will just have to worry about your own weapon: the pistol, vase, shotgun or whatever you took around the house to smack a monster head or two.

But don't think fighting will solve everything. After all kicking otherworldly demons like the ones you'll eventually find is a joke. For them, of course.

So you'll have to run, see how the character gets panicked (just until you raise a few levels) and find amulets to help you against the monster. Because once you get a good amulet no gun is needed.

And let me tell you there is no better amulet than a polished 1990 World Series baseball bat. Oh! I didn't mean that, I was telling you there are great amulets like that voodo thing to become invisible to zombies, or those things you can use to banish alien demons.

The rest is as usual, you will even find a bunch of spells to learn, and enemies will gift you with status to heal, and all that.

So apart from breaking skulls and screaming while running around aimlessly, you'll have to find places to sleep and recover, find your way around the house and improve your skills.

That part is nice, there are several skills. I don't know what lifting is for, but the other ones have some kind of use, like opening locks without needing the key, or restoring more hitpoint with medikits, or… well, I'm sure there must be something unexpected around.

But, if there isn't, who cares? This is well done, and fun. You just have to run around an absurd mansion, eating, sleeping, beating up anything that moves and running from hideous otherworldly horrors.

Have you ever wanted to experience how it could be to the protagonist in an Edgar Allan Poe, or even, H. P. Lovecraft novelization? Well, look no further, because in this game you can! This game is an RPG game with a lot of horror elements in it.

The plot is that you as the player, are inheriting a big mansion from some ancestors you did not know you had. The door locks behind you and you are trapped in the house. Can you escape? You start out as in many other classic RPGs. You have to choose between either a female or male character and set the skills within an range of attribute points given. The ratings each one have is ranging from knowledge, strength, dexterity, stamina, willpower and so on. If you will you can go with what the game offer you, or you can re-design every character to fit your own play style.

The game world is huge and you will encounter many levels (how big can a mansion be?). You have a basement, you have several floors to explore and also some other levels that I won't spoil here. You navigate your character through this house and believe me when I say that this game will give you some uncomfortable moments. The graphics are for its time very good, and the animations are very nicely done. The music is very effective and there is some really scary sound bits here and there.

One thing that makes this game stand out from other games is that you have total control over your windows interface, meaning that you can resize almost every window in the game, be it your character window, the main window or the mapping window (the game features auto mapping), message box and so on. You can also save different layouts and load them for your own liking. Pretty neat!

The game mechanics focus heavily on exploring, survival, and solving puzzles. The approach of killing everything will not work in the long run and you will have to find strategies of how to manage the different encounters in the house. This is one thing that makes this game a bit unique. If you cannot kill a monster, maybe you can find an artifact that will help you get rid of them without using violence? Furthermore, regarding the puzzles, they are not hard, but you may have to find clues in form of notes scattered all over the house. There is also all kind of weapons, ranging from guns to knives, to magic. Also strange artifacts to be searched for. The game relies heavily on magic so to invest skill points in this is important.

I should also mention that the inventory is a bit strict. You have your interface in form of just four slots in the beginning of the game, but you will find a briefcase early on that will give you more slots. There is a bit of micro-management but not to a bothersome degree. You cannot hold everything in your briefcase so you will have to resort to dropping stuff and try to remember where you put it. This also means that you have to go back several floors to get a thing you forgot carrying. Not bad, even realistic even, but this can be annoying.

So why would you wanna try this game? I would say that for me it was for the alluring horror elements. If you are into horror movies or games with horror elements, this is not a game to miss out on. You have your share of malevolent entities in form of monsters, ghosts and other things and even NPCs. Secondly, the game is very good at making you feel a bit uncomfortable and on alert all the time. The strength of this game is making you feel helpless and alone.

The game hasn't aged badly at all in my opinion. I thought that the game perhaps should feel a bit old, but it still feels as fresh and intuitive now as it did back when it was released, and that for me, is what gives this game the legacy of its own.