Simon the Sorcerer II: The Lion, the Wizard and the Wardrobe
for Amiga (AGA) 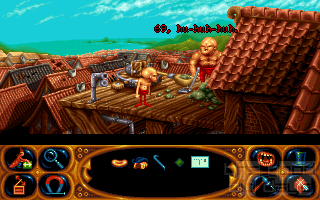 Simon, who has now grown into a cynical, cranky and at times annoying (i.e. typical) teenager, is once again summoned to another dimension where the good wizard Calypso needs help defeating the evil Sordid who has returned from the dead after some stupid kid fiddled with a magic book. 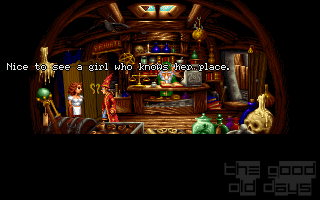 That's right, Simon, be an asshole - the girls love it!

Simon the Sorcerer 2 continues the series tradition of imitating Monkey Island: While the first part had the three trials to become a sorcerer (pirate) given to the hero by three very important looking magicians (pirates) sitting in the backroom of a tavern, this game has a zombie-like, resurrected baddie whose quarrels with his assistant are shown in various cut scenes (the parallels to LeChuck in his zombie form and Largo LaGrande are obvious). The game even goes as far as trying to imitate Monkey Island 2's famous ending.

Putting that aside, the game does have its own merits. Puzzles are logical and not too hard. Sometimes, it goes overboard a little with busywork, though. One example would be the money puzzle: You basically have to understand and apply a nonsensical value system of different coins (a stab at Britain's old, non-decimal money system?) - which is a good idea for a joke, but actually being forced to work with it isn't fun. 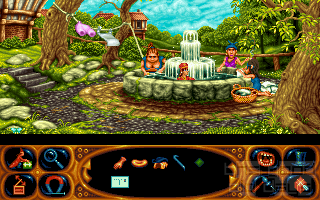 Graphics are good, the game is long and some of the pop culture references do induce a few chuckles, even if some people and locations seem to be a little out of place in the game world (the roleplaying guys...).

Simon's crux, though, is its own attempt to be Monkey Island. This is a high standard to be measured by, and due to the parallels of the games, it is the standard which forces itself onto every reviewer. And Simon can't really compete there: It's funny, but not as funny; it looks good, but not as good; it has imaginative puzzles, but not as imaginative. Which is why these games will always appear worse than they actually are.

Concerning this Amiga version, it is a case of 'better late than never'. The game was ported by Epic Interactive years after the original IBM release. Obviously, hard disc installation is required. 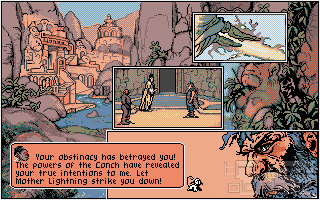