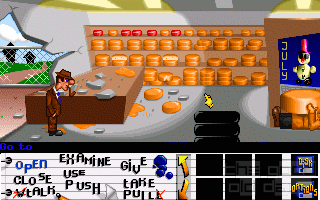 The Amiga family of computers weren't blessed with the gems Day of the Tentacle and Sam & Max. ScummVM was still a few years away. Fortunately, there are always creative people to fill such gaping gaps. Enter Sixth Sense Investigations - the Lucas Arts game not made by Lucas Arts.

Sixth Sense Investigations is the name of the detective agency run by Frank and his pal Ben, the protagonists of the story. Frank desperately tries to look like Sherlock Holmes, always dressed in tweed and an oldfashioned pipe in his mouth. Ben is the exact opposite: Rasta hair and running around in in pyjamas. Most of their jobs consist of finding lost pets or keys. Maybe not exactly what Frank had in mind when he founded the agency, but it's a start and (apparently) makes a living. Especially since the job isn't all that hard, because Ben is in contact with a ghost who seems to have a 'sixth sense' - makes finding the culprits a lot easier.

Their latest case is of a bigger dimension (literally) though! Ben was off to test some new toys at the local factory when he suddenly disappeared, but not without the kidnappers wreaking havoc in the factory. Frank is called to the cheese factory where the same thing happend: the wall has been broken down and the interior is complete chaos. Will Frank be able to find out who caused this and also locate his lost friend?

The style of the graphics has obviously been inspired by Day of the Tentacle and the freaky setting and characters could be from that game, too. In the later game, when you'll travel to other dimensions, Sixth Sense Investigations even goes beyond that: every character you'll meet is twisted and crazy, every place you visit screwed in some way or another. This is actually where the game loses some points - it sometimes could have been a bit more subtle for my taste.
Here lies the biggest problem of the game: While it is hilarious and well thought out on the large scale, the details are lacking sometimes. Some dialogue is a bit uninspired, some characters not unique enough in their personality. Even Frank and Ben (whom you get to play later on) aren't really different when you look under the surface of their appearance: they use the same phrases to tell the player he's trying something impossible for example.

Other than that, Sixth Sense Investigations is not only an absolutely worthy 'replacement' for its more famous PC counterparts, but a really great point & click Adventure by its own right. Sadly, it is way too often undeservedly overlooked. If the designers would have put a little more time in the details, if they would have made the animations a bit smoother and if they had made the game a bit harder (the difficulty is targeted at beginners), it would have gone straight into the list of my top ten games of all time!

Technical Information: This is a CD game which has full speech for all conversations. The speech is always in English, no matter which of the three languages (English, German, Italian) you choose for the game text. There is also a disk version (which has to be installed to the hard disk) without any speech, but it takes away something from the overall atmosphere of course. The game needs at least a stock A1200 (68EC020 CPU, 2MB Chip RAM, AGA chipset) to run. Faster processors and additional Fast RAM make the playing experience a lot better, but they're not necessary.
Trying to run it via UAE on a PC, the bottom menu (verbs, inventory) didn't look right, it was somehow shifted. The game is still playable via emulation, but to make the screenshots, I had to modify the images a bit manually (you might notice the lack of inventory items on the first screenshots). This has supposedly been fixed in the latest versions of UAE.
Oh, and try the download, even if it's 'only' a demo - it's quite a long one and it features unique puzzles not found in the full version!

I'm the storyboard developer and co-project leader of Sixth Sense. My experience was similar to Raymond's - it was my first game project, and today I'd do a lot of things different. But it still was a fantastic experience, and despite the fact we haven't earned much with the game, I loved working with our great team, and I'm still amazed how many people still love the game even today.

I'm currently not in the Games biz anymore, but hey, you never know what the future holds for you...

Hi, I am the artist for the game Sixth Sense Investigations. Our team was made of 8 people scattered all over the globe and that made developing sometimes harder. Nevertheless I think the programmer and developer made a good effort in creating a classic and entertaining game. Looking at it now I would do it differently, but at the time I was more a newbie then I am today

So if I would create the game now, I surely would make a better game

But thanks for all the nice comments though. It still suprises me that people liked the game so much, since we never earned a lot of money with it.

I do have another design for a adventure game, more serious in style, so maybe someday i will make it for the PC if there enough people to buy it 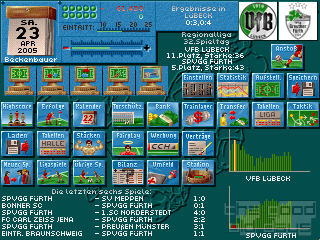