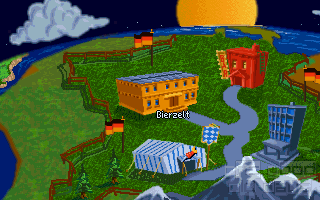 Sensational news right before the 1994 German election: A new supercomputer has analysed statistical material and its result is that Paul is the perfect candidate for the chair of the Chancellor! He's not only the best man suited for the job concerning his abilities, but also exactly the kind of person the people want - a man without any firm opinions. Dr Becher from the institute housing the computer is supporting Paul's candidacy, but what are his real interests? 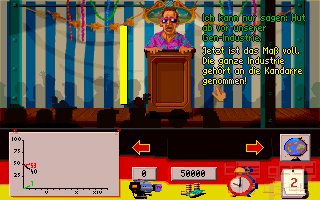 Hurra Deutschland was a popular political satire show on TV in the late 1980s. It was mainly known for its use of very distinctive rubber puppets of politicians. These puppets are also the protagonists of this game: Apart from Paul, his rivals (Mr Kohl and Mr Scharping) and several other players of worldwide politics (from the Pope to Margaret Thatcher) appear.

In spite of being the scientifically perfect candidate, Paul's problem is obvious: Nobody knows him. So within just a few days, he has to catch up with the better known candidates of the CDU and the SPD. What's most effective is travelling around the world and being photographed with other world leaders. Many of those are quite wary of whom they're seen with, though, so they take some verbal convincing via multiple choice conversations. Some people may also give you items which might be of use somewhere else later. Another strategy is holding public speeches to show your face to the population directly. 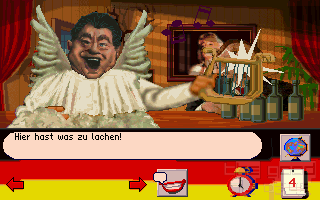 Every day, the latest polls show your progress. On the evening right before election day, there is one final chance to catch up: In a public TV debate, the three candidates can throw mud at each other. For this final confrontation, they have to buy scandalous revelations about the others in the days before, which will destroy their public image. Of course, there is one defensive tactic: Everybody can buy accusations or rumors about themselves so that they won't get out, too.

The game isn't exactly complex. After some trial and error, the solution can be reached deterministically and easily. The main draw is, of course, having fun with the political satire. Nothing really about timely topics, but the game rather makes fun of the whole political circus (especially elections) in general. Good choice, because that way, it doesn't age as quickly, i.e. it's still a choice for some good hours of fun today. 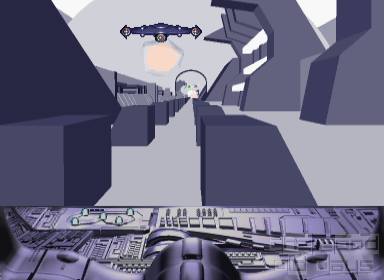