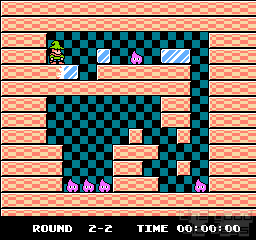 Puzzles, they have a thing for sounding always the same. What is this? A puzzle. So you move blocks around to screen? No, you create ice and get rid of fires, you say. Just that in the end, it's about moving blocks around the screen.

Sound a bit gimmicky. And maybe it is, but still... Well, it's just a puzzle game, don't worry about it. You'll be running around the screen trying to find the way to throw ice on the fire, and you'll be thankful for that.

But before continuing I'll comment that, even if this game is the second part of Solomon's Key, there is little relation to the first game, just having a magical wand. That this time creates ice blocks instead of stone ones. You won't have to worry about enemies, traps or anything, except solving the level.

You are here just to put those fires down. So start working, and learning about the mechanics. Don't worry, as they are quite simple: you create ice next to a wall, it gets sticked to it. If a piece of ice is no longer grabbing a wall or anything, it falls. And if you push free ice blocks they slide.

There will be a few things added for variety as you go on, like tubes, or bosses with countdown levels (or more exactly, levels that descend into fire). But the basic rules won't change.

And the levels are not that hard. You may find a few that will take you a few minutes, but usually they are done quite fast. Maybe the secret zones that seem to be somewhere are harder. But in the worse cases you can always build your own level.

Yes, the game includes a level editor. Which of course is very complete. And of course doesn't include any way to save it, as the game uses only those damn codes for saving. No memory for you on this cartridge.

But, well, maybe it's not required. It's an easy game, a fun game but way too easy for a puzzle game. Maybe too easy to keep playing long.