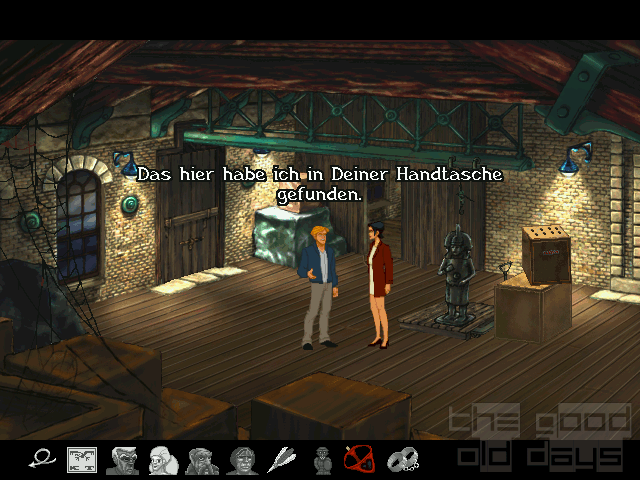 George Stobbart - occupation: American tourist in Paris. After a few month, he comes back trying to get it on again with his girlfriend Nico, the photograph who helped him unravel a Templar conspiracy in the first game. Instead of the date he hoped for, Nico drags him to the home of a Professor of Central American culture - where the two are knocked out. Nico is taken away while George is bound to a chair with a poisonous spider in the room. And just to be sure, the baddies also set the room on fire. 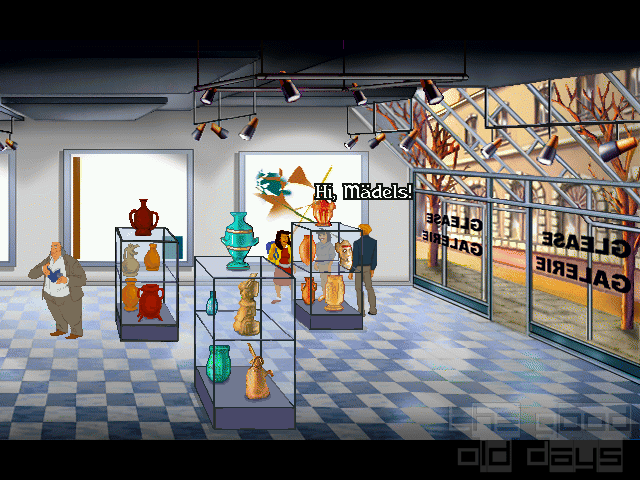 Now that Nico is gone, George is hitting on schoolgirls
After getting out of that situation, George feels obliged to find and free Nico, but as much as he hates it, he has to enlist the help of his main rival who also tries to get into Nico's pants... using the classic way of sending her gifts - and not just any gifts, but kinky underwear. Which George finds and subsequently just has to show to everyone he meets. It's the used handkerchief all over again...

In an obvious attempt to give George a least a hint of a character, the situation hasn't really improved much. Instead of the good-guy-boy-scout, he's now a complete tool. Especially when he's talking to that other Nico-related guy (who, to be honest, behaves much more reasonable than the protagonist, although the game tries to portray him as an asshole), the player feels the constant urge to punch George in the face.

After freeing Nico, the story, of course, takes a turn towards religion and conspiracy again, with a Mayan artifact used to summon one of their gods and some sort of smuggler ring in the centre. Nico and George also travel to Central America where the player gets to control Nico, too, when the story branches for some time. 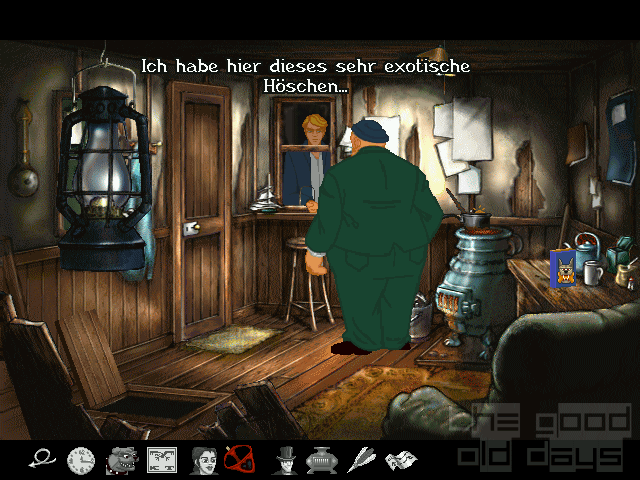 Showing a fat guy working at the docks a woman's panties...
Although the first part was already very quite easy, Broken Sword 2 takes yet another step in that direction. The game is completely linear, it doesn't even pretend to give the player any choice of location anymore. Puzzles are on the obvious side. To balance this out and keep the player occupied, there are locations which are cramped full of people and objects, but there is nothing to do there (but leave) - it's all just a smoke screen. And there is a maze. Great idea.

Players who are mainly looking for good graphics and relaxed progress won't be disappointed. Seasoned adventurers looking for puzzles to mangle their brains will be.

Apart from that phrase (but maybe it was from the first) that I recall because a friend loved it, from this game I only remember that it has good drawn cutscenes.