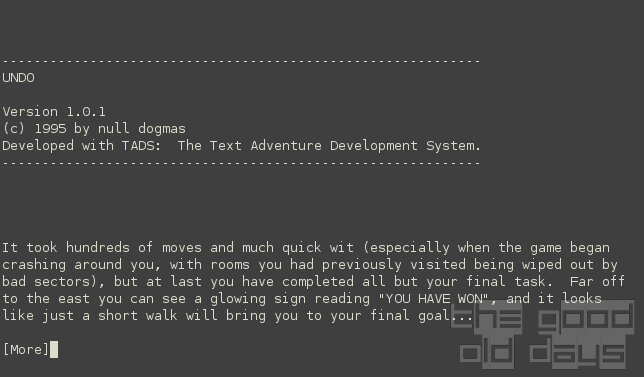 So you've played for days and weeks and finally, you get to what seems to be the ending. You can (virtually) already see the 'you have won' sign on the horizon. All you have to do is go east... but what's that? A hole, a frog and a small duck are blocking your way. This can't be what it was intended like? Turning back reveals the problem: bad sectors on the game disk. Argh!

An entry to the first Annual Interactive Fiction Competition, Undo may have only 'reached' the last place, but it broke ground in its own way: It was one of the first attempts not to write a classic storytelling game in Infocom (or whatever other classic company) style, but to play with the conventions of the genre itself. The game is to beat a game within a game, finding ways around virtual technical failure or even using it to one's advantage.

In the end, it's not that much about winning. As it turns out, this is just one single puzzle. What's more entertaining is experimenting with everything in the five locations of the game. Each of them has got its own theme: For example there's the self-referential room which is basically an endless recursion. Another one contains just a 'binary swamp'. Though, maybe a minor quibble, the author seems to equate zero with 'nothing' - two completely different concepts in information technology!

On the whole, Undo works very well. Although it is a one-trick game (and one based on a pretty bad pun), there is just enough entertainment on the way to get the point across and once you discover some of the inner logic of this buggy world, you're bound to laugh out loud at the twisted, but in its own way reasonable occurences. And this is pretty much what everyone would expect of such a game, isn't it?