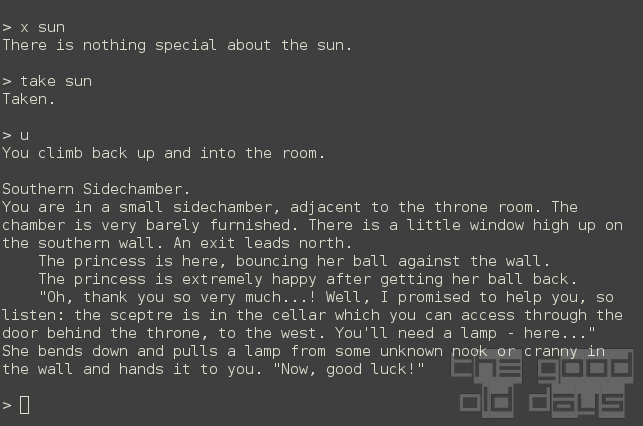 It's every player's nightmare: An aspiring IF author (to make matters worse, one who is related to you) asks you to beta test his game. This can be fun, but if the game is really, really bad and if you can't really tell that to the person in question, things get ugly. Bugged is about you playing your cousin's first attempt at writing a game, and not only is it a completely linear set of boring rooms, located in a castle of a bog-standard fantasy kingdom, but pretty much everything imaginable went wrong technically - the game is bugged to the extreme. Most of the puzzle solutions don't work as expected and imagined by the author. So you have to find ways around those bugs. I.e. you exploit other bugs in order to progress.

Quite a clever premise, because this makes room for the best thing about the genre: requiring thinking out of the box. In most cases, the obvious (and boring) puzzle solutions are there and they are supposed to work (within the virtual game within the game). But they don't due to bugs. So you have to fool around to still get ahead. The window is too far away and the magic fruit which are supposed to strengthen you can't be taken? Just grab the window - as soon as it's in your inventory, you can climb through it!

As hilarious as this premise might sound at first, it's still fairly restrained by the standards of what anyone who has ever beta tested a game can imagine. Some standard bugs appear again and again, most notably the apparant confusion between static and non-static objects and the incorrect pointers to default nouns. Other typical pitfalls didn't creep into the game. For example, there doesn't seem to be a single case of a missing synonyms, problems of wording in general or spelling mistakes - very strange, considering the otherwise extreme sloppiness of the execution. Also, it is strange the the storyline of the game within the game isn't all that pompous and serious. Given the circumstances and the backstory, this would have made a lot more sense than the sometimes even tongue-in-cheek remarks found here.

With the same 'bugs' appearing again and again, 'workarounds' repeat themselves pretty quickly, too. Although there are only ten rooms and chances are veteran players will whizz through them fairly quickly, it already gets a little tired within this short timeframe. Interestingly enough, the final puzzle take things up a notch again, showing how this whole idea of simulating a buggy game could have been used to varying effects, teasing the meta-game's player's brain cells a little more (getting confused yet?). The way it is, Bugged is a good chuckle for developers and testers alike, but not the epic lighthearted satire it could have been. 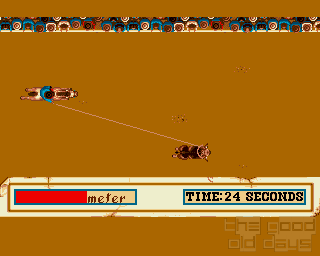