The Pawn
for Amiga (OCS/ECS) 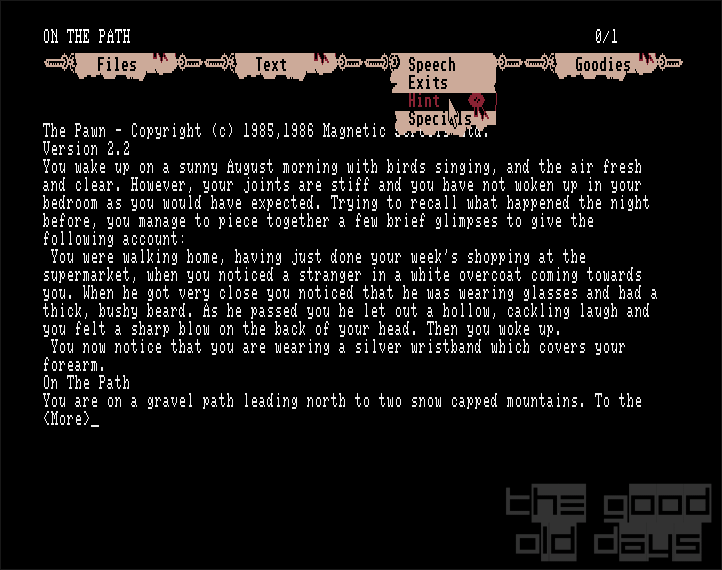 Europe's answer to Infocom wasn't in fact all that similar to its american counterpart. Apart from the obvious facts of being founded a lot later and surviving longer, Magnetic Scrolls developed their games for a completely different market. While Infocom was still stuck with the inferior 'typewriters' ruling the US market (to this day), Magnetic Scrolls wrote their games for 'home computers' - with the European market in mind, where these machines were immensely popular. The Pawn, their first game, was developed for the Sinclair QL, a then brand new computer which turned out to be a very bad flop. The game was ported to the other new 16 bit machines: the Atari ST and the Amiga. These versions first showed how fresh Magnetic Scrolls' approach to the genre was: they featured a set of graphics showing the settings in stunning quality! The later ports to the ever-popular 8 bit platforms (C64, Sinclair Spectrum) had to live without these graphics again.

Apart from the graphics (in case you've never played the game and you're wondering where they can be found: you can drag the top menu down with your mouse), the Amiga version features another nice technical feature: you can tell the game to read all the text to you. Younger readers might wonder how so much speech can fit on a single floppy disk. It's simple: it's not recorded speech as you might be used to from modern-style CD-ROM games, but a computer-generated voice (old Amiga users will remember the Worbench's talk program). For people who aren't blind, this is of course nothing more than a gag - you can read the texts in less than half the time.

Fans always talk about the comparison of this game's parser with Infocom's. I'm not that much of an expert to be able to compare them. Both absolutely more than satisfied my needs. That said, I doubt anyone will have reason to complain. Puzzles are logical and of moderate difficulty.

Oh yes, and there is also a story. Unfortunately, it's some fantasy stuff. It's about you waking up in the medieval kingdom of Kerovnia. You discover you have an unremovable wristband attached to you. All you want is to get out of here - but certain natives have other plans for you. The plot is mostly ok if you take the bad fantasy premise into account, and fortunately, the writing is not all that serious. The humor can be crude at times (the Adventurer....), but in an effective way. Just good and harmless entertainment!

If you think I'll come to a conclusion if Magnetic Scrolls or Infocom produced the better games, I have to disappoint you. Both companies made very good Adventures and The Pawn shows the basic differences in the styles pretty well. In the end, it's all a matter of taste. The Pawn is a good game, it doesn't have to hide from any competitors.

For the experts: we're offering v.2.2 which as far as I know is the most 'current' for the Amiga. Check out the Magnetic Scrolls Memorial in case you have trouble with the copy protection.

Mr Creosote:
Feel free to share anything about The Pawn (1986) here!
[Reply] 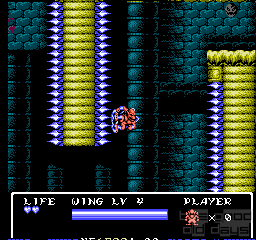