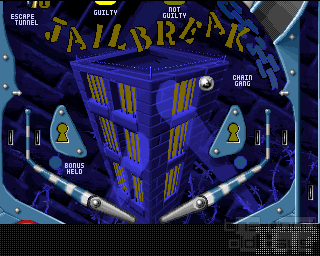 Pinball Mania is one of a whole slew of games which came out after the success of Pinball Dreams and Pinball Fantasies. As usual, there are four tables.

Feed a giant spider and avoid being eaten. This table is alright, but it suffers from one thing: There is hardly any way to get any points unless you unlock a 'tower' by lighting up some targets first. Once you've done that, the millions suddenly begin pouring in. Since nothing outside of the tower is really worth going for, playing the table is feels fairly limited and linear. 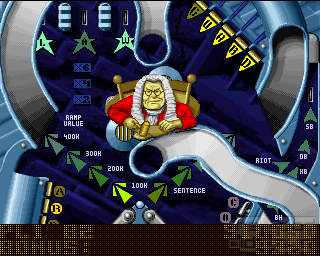 In a totalitarian state, you're police, judge and jury combined (no seperation of powers). You catch criminals, try them, find them guilty (hopefully), put them in jail and then - while trying to catch more evildoers - watch over them so that they don't escape. This table doesn't just have a very good layout, but it simply makes sense: To get to the real points, you have to play the 'story' which requires quite a few different actions and combinations of targets. So it never really gets repetetive, but stays challgenging. 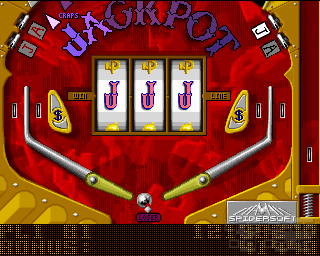 The stinker of the collection: In theory, this table is about winning a football (soccer) tournament. In practice, random football words ('offside') are assigned to the targets in a way which makes absolutely no sense. For example, to win a match and thus advance to the tournament's next round, you have to hit 'foul'. Right. The table is completely symmetric with all targets being located on the sides. The centre of the table is just one big empty space, save for one nipple which is there just as an obstacle (you'll hit it all the time). Losing a ball is almost impossible, because the gap between the paddles is tiny. Even normal targets are worth billions of points, making any structured play unnecessary. An obvious case of 'what were they thinking'.

Win big money in a casino. Play Roulette, simple card games or feed the one-armed bandit. There isn't much of a 'story' here, but the table is fun due to its well-crafted layout and the relatively clear and balanced structure points are awarded. There are no targets which are clearly better than others, allowing for varied yet successful gameplay.

My personal pick: Jailbreak, obviously. That table is probably my favourite of all the 21st Century pinball games. 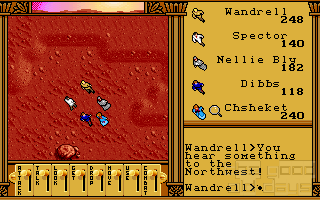