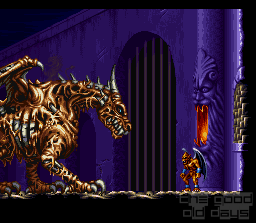 Firebrand comes again, ready to save the... Wait, there is nothing to save. This time you are here just to get rid of a guy who wants you dead, and to play a greatly improved Gargoyle's Quest. So overhauled it's not even part of that series.

This time you are not the good guy. Or at least not the hero. There is little back story, but it seems you have been banished to the human world for causing havoc in the ghoul realm. A human world destroyed and filled with monsters, so you won't notice much change.

The general game is the same. There are upgrades, a map and places to explore, but with many changes. First the upgrades won't just improve a few qualities, like the time you can fly (you no longer get tired, by the way) or how high you can jump.

Upgrades come in a few varieties. First there are attacks, which are the same from the second Gargoyle's Quest, and then the shapes. You can choose an attack or a shape, so in the end you end transforming. Why creating platforms when you can become a flying gargoyle that flies in any direction?

Each of these is received when finding the corresponding token, but they are not the only things to discover around. Apart from more life there are vials, scrolls and amulets.

The vials and scrolls are to store potions and spells. One use items with a variety of powers (Yes, it means you'll end using just the healing ones). While the amulets give you an enhancement as long as you are wearing one of them, like finding more money.

In the end this goes more into the action and platforms genre than the RPG one, that it was barely touching anyway. And they knew it, so there are more midbosses, and in general much better bosses, and less attempts to add puzzles, or even uninteresting dialogues. The game have been reduced to jumping, killing and grabbing walls, and it was an improvement.

Even if it still lacks savegames, I would hate passwords if we didn't have emulation nowadays, it is an improvement in all aspects. They even added several endings, including one with a true boss that requires too much time to achieve.