Eye of the Beholder II: The Legend of Darkmoon
for Amiga (OCS/ECS) 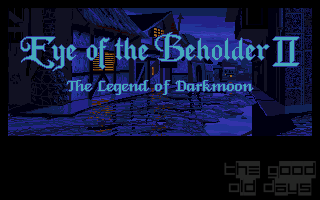 Just about 7 months had passed since the release of the first Eye of the Beholder. What to expect of such a close sequel? A rushed more-of-the-same mess or, as in this case, the very game the previous one should have been in the first place. How so when obviously, Legend of Darkmoon is based on the same game engine? Game design. 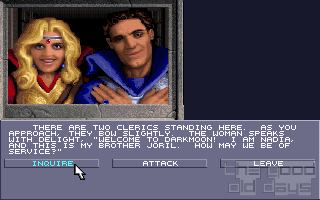 The investigation into a missing person case in and around the eponymous temple offers quite a bit of variety. Where in the predecessor, level followed level in purely linear fashion, Darkmoon – after its small forest introductory level – offers a cellar plus several different towers each of which having its own theme and which to some degree can be tackled in different order.

Most levels are also inherently structured much more strongly. Instead of the big, confusing spaces of part one, areas are smaller with clear gating between here. This even balances out the still missing automap a little. Unless the designers really want to confuse players with their usual fake walls, invisible teleporters and spinners again. Though all this has been toned down to a much more bearable level. 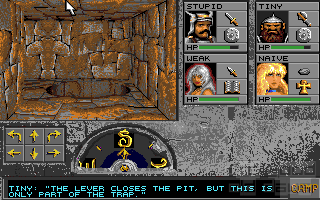 Instead, focus is on achieving progress by opening locked doorways. Using all those different kinds of keys, but also figuring out small puzzles based on switches, levers, pressure plates and… riddling, disembodied mouths? Yes, things do get a little freaky here and there. Such as when some levels are inhabited by giants who have to crawl through every corridor due to their size.

Other parts of the game have more tangible specialties in gameplay terms, such as the tower in which the player faces several tests in order to be accepted into the order of Darkmoon or the passage which has to be beaten without the use of spellbooks. Those bring some variety into the usual exploration and fighting mechanics. It lies in the nature of it that some other areas turn into rather a pain to wade through, such as for example the one inhabited by dozens of beholders. Happy saving and restoring! Similarly, most traps are really unforeseeable and as such can only be handled through saving and restoring, too. 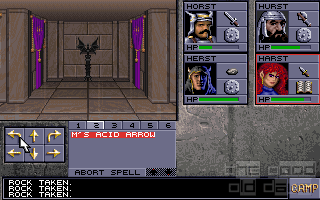 What kind of beings are actually worshipped in this temple?

The non-linear structure requires a lot of backtracking and switching between levels. Upon level change, all enemies have the bad habit of respawning, letting you kill them all again. Good for experience points, but if it's the same horde of bullettes again which can just kill your party with two blows on a bad day, you can imagine how much fun repeated exploration is.

Speaking of experience points, Darkmoon lets you import successful veteran characters from part 1. Nice feature, but it comes at the cost of a difficult balancing act. Newly created characters start at level 6, the lower end of what endgame characters of the previous game would have. Plus the veterans will come with vastly superior gear. As such, players not having gone through the first game clearly have a harder time, even if the game is rather generous handing out nice new equipment throughout. 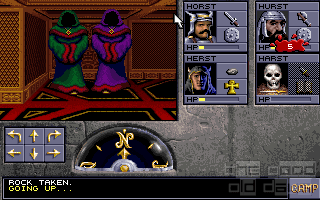 Though then, with all of these points of criticism, what were they supposed to do? Without monsters which can actually kill even advanced characters with few blows, given the endless opportunity to rest and restore the party, there would be no danger. Without deadly traps, there is even less of a challenge. Even though most encounters spawning character closeups actually just lead to pseudo decisions, they nevertheless also help making the world feel much more alive. Just as the frequent remarks and observations made by the player's party when just walking through the dungeon.

Darkmoon feels alive and even if not all sections are amazingly good, it does offer a nice arc, with everything leading up to the big final, very satisfying confrontation. A far jump from the rather one-dimensional predecessor. If you want to know what the big hype associated with the series is all about, this is the one to play. But don't be surprised if it is nevertheless not quite the amazing experience you expected.

The heroes of Waterdeep are back: Evil emanates from the temple of Darkmoon this time... a huge building full of priests and monks (very typical source of evil) and - as it turns out - with a complex system of catacombs beneath. What are these people up to? 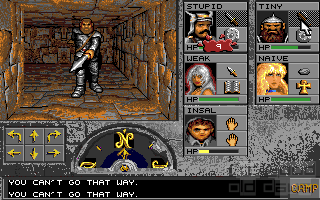 A very popular feature of RPG sequels is the import of the veteran party of the predecessor. Which is great, because you get to use all those high-levelled heavy hitters with all their fancy equipment. Alternatively, you have to roll new characters.

Which leads to an obvious problem of balance: The game has to stay beatable with the new characters, but at the same time challenging with experienced characters. Newly created characters do start at a decent level with some decent weapons. However, you'll still notice the task at hand is a lot harder than cleaning the catacombs of Waterdeep: The enemies are tough even in the first few levels already. You'll learn to appreciate the (limited) resurrection shrine quickly. 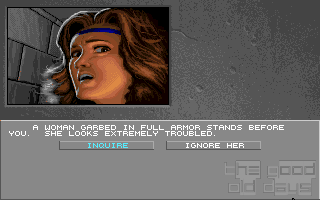 Where is the 'attack' button?

A little more effort has been put into human encounters to have some more of a story after the intro. Likewise, your own characters are more chatty, commenting on your surroundings and providing you with some hints from time to time. Still, the game depth isn't anything to rave about really. It's more pretense on the surface than anything else, but pretense which is working to a degree.

Graphics are good and the levels look more varied this time around. Enemies sometimes change their appearence, too (you'll meet guards in various states of undress, for example). The main problem remains, though: still no automapping. Basically, everything is still the same as in the first part. Just larger and harder. So the standard recommendation: If you liked the first part, this one is for you. If not, chances are you won't be converted by these priests.

johanvc:
Actually there's a partial rewrite of the game (from 2007) by the Amiga Game Factory that does include the automapping feature, and supports AGA using the palette from the VGA PC game. Definitely the version to play on Amiga! Check it out on http://agf.abime.net/pages/EoB2.html
Mr Creosote:
Feel free to share anything about Eye of the Beholder II: The Legend of Darkmoon (1992) here!
[Reply] 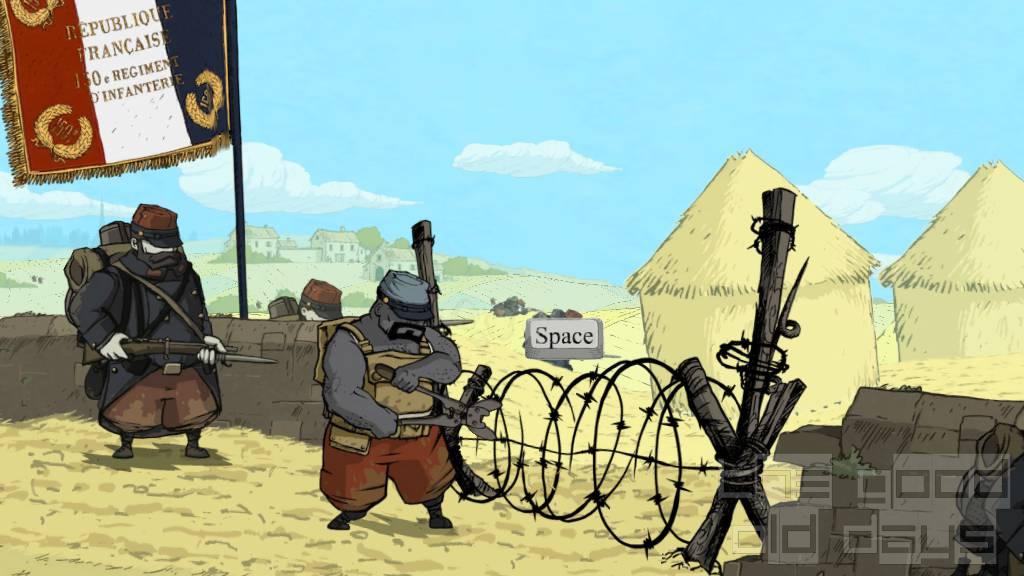