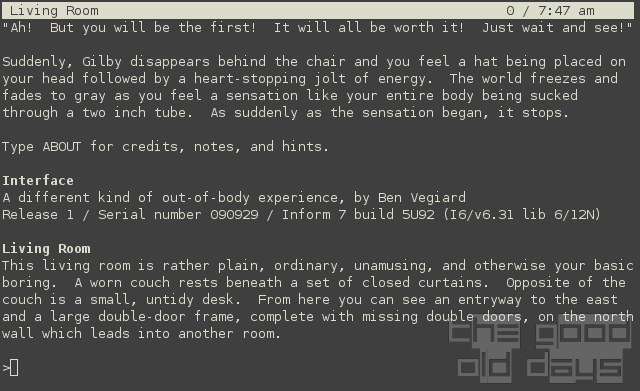 Sometimes, it's best to let a game's author to use his own words to describe his game: “Interface was conceived in about 1984 by a 14 year-old boy who wanted desperately to work for Infocom. [...] That boy grew up to be me. [...] To be true to my childhood delusions of grandeur, I have coded up the game as an exercise in 'what would it have been like' and to surprise a few fellow-gamer friends of mine. [...] Thus, you find before you a throw-back/relic delivered with care. While I don't pretend this to be a work of art, I do feel it's an honest attempt of which my 14 year-old version of me would have approved; warts, plot holes, and all. I hope the 1984 version of you, if applicable, enjoys as well.” If that isn't the kind of game this site was made for...

The plot's innocence and naivety indeed rings of 1984: Uncle Floyd, an ingenious inventor, and his assistant Gilby just strap the protagonist into some dangerous looking gear, push a few levers, turn a couple of dials and... you find yourself in a robot body. A crappy robot body. Uncle Floyd is shouting at Gilby. Something must have gone wrong with the experiment. Gilby gets to take you home with him in order to get you back into your own body. Which, however, he has no plans to waste any minute on. Instead, he already thinks about his career in another company. Things don't look good.

Interface does many things right. Most things, actually. The setting is limited to few rooms which are all accessible all of the time (after finding your way there first in some cases, but you never lose access again) which pretty much rules out dead ends. There is only one NPC (Gilby) who leaves you alone after about half of the game, triggering the only substantial change in the surroundings. The rooms are well-described and they contain the right amount of items to be believable, but not overly confusing. There isn't much - but what's there is done in an entertaining way.

The author describes the game as introductory level game. This doesn't strike me as quite right when it comes to the puzzles. Most of them are obvious. There's a patch of water which you can't drive over without endangering your metallic chassis and its electronic innards - well, which of the objects could possibly help out there? A machine does have a free slot for a board? Ok, then let's just search for one in the vicinity. I'm not even sure most of the tasks the player has to fulfil even count as 'puzzles'. If there's anything to wish for, this would be the area to improve. Keep in mind that what Infocom called 'introductory' is Moonmist.

The quality, however, is that this game is simple and innocent fun. It's a great contrast to the usual pretentiousness common in the genre these days. For once, you don't have to pay close attention in order not to miss some complex allusion or some meta comment on society and consequently make a fool of yourself when talking about the game ('How could you have not understood that? Are you some kind of idiot?'). How refreshing! Why can't we have more like that? Both my 14-year-old and my current self approve. Highly recommended!

This game was a contender in the Interactive Fiction Competition 2009 where it placed 8th out of 24. 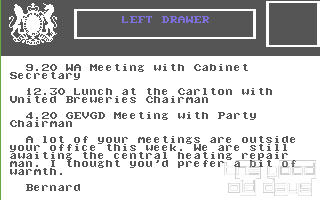