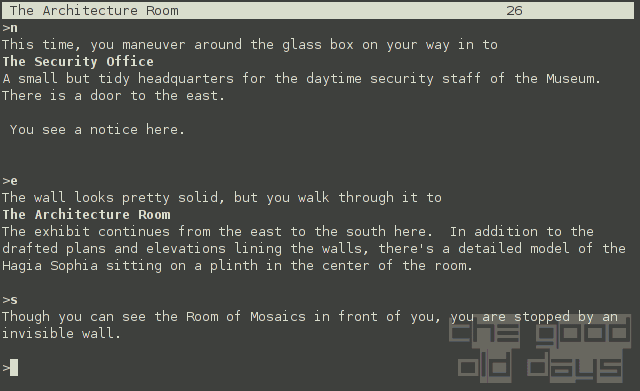 Although the annual IF competition is a great event, there is one big problem: Usually, the number of seriously buggy and broken entries is high. That leads to many reviewers' threshold for believing a game to be broken to be very low. Which means that sometimes, a game will be considered broken which really isn't. A trap which Byzantine Perspective fell into until word got around that what it made appear broken was in fact a big puzzle. In the end, the game placed in midfield, but it was a lot more popular with the other authors (who, by definition, are probably willing to put more trust into a fellow author's work), taking third place in the so-called Miss Congeniality contest (voted by the authors).

What made people doubt the game is that something appears broken indeed. It's just not the game itself, but something in the game doesn't work exactly as expected. This results in some strange behaviour as you stumble around fairly aimlessly during the first few turns. You see things, but when you try to pick them up, you can't reach them. You try to go through the doors listed in the room description, but you run into walls. Instead, you find unlisted exits. Figuring this out is what the game is about.

Formally, the game puts the player into the shoes of a cat burglar attempting to steal a valuable chalice from a museum. The chalice is visible right there in the first room... nab it and you win the game. Doing that isn't quite as easy as the one obvious command. Once you've figured out how to deal with your surroundings, it's not a really long game, either. It doesn't require too much patience of the player and the hints are more than adaequate. Yet, the solution is clever and that makes it worth it - if you've got faith.

This game was a contender in the Interactive Fiction Competition 2009 where it placed 9th out of 24. 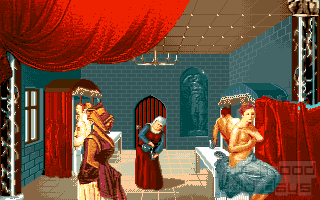