Warlock: The Avenger
for Amiga (OCS/ECS) 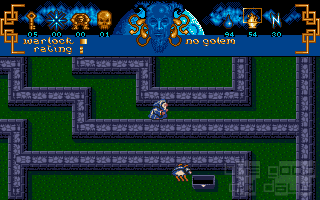 Druid in its third round. War rages again in Belorn - how original. Lone magician (this time not called 'druid', but 'warlock') battles his way through and ends the threat.

After the relatively fresh and original Enlightenment, Warlock is a complete turn towards the original again. No more complicated spell management and also no non-linear levels anymore. In fact, the best description is this: New levels for the original Druid.

There are exactly the same spells, exactly the same tasks. Just the interface has been streamlined a bit for the Amiga: choosing spells is now done via the F-keys instead of random ones spread all over the keyboard.

In fact, since Druid was never ported to the Amiga (Enlightenment was), Warlock even contains the full original game (see additional screenshots for pictures of these levels). Starting a new game, you can choose whether to play the classic levels or the new ones. And the port is very good: It's exactly the original, just with better graphics. Twice the fun for one price!

Why the rating if it's all the same and also more? Two reasons: The levels of the actual 'Warlock' aren't as well designed as Druid's. There are too many open spaces on which monsters can approach from all directions. In the chests, you'll find an abundance of spells and you'll even need them, because the monster frequency has apparantely been increased. Second reason is the complete lack of originality with this imitation.

The Amiga port of Druid would of course deserve the original rating, probably more for the vastly improved graphics. In this review, only Warlock matters, though. When I first got Warlock (ten years ago), I almost exclusively played the Druid-levels, not Warlock-part. Playing it nowadays, it's still the same - for a reason. Warlock isn't bad at all, but it smells of assembly line. And with this, the series ended. The victorious hero will live on in everyone's memory.