The Duel in the Snow
for Interpreter (Z-Code) 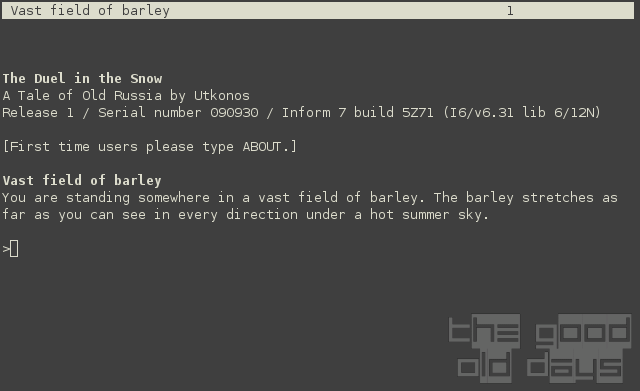 The Duel in the Snow (A Tale of Old Russia) is a positive example of a new breed of text adventures: storytelling over gameplay. It is a mood piece, soaking with melancholy: Victor Pavlovich wakes up with a hangover. The memories of his wife Natasha leaving him are slowly creeping back. And then there is this nagging in the back of his head... ah, yes, the duel with Gronovskij who, according to Victor's best friend Kropkin, is an excellent shot.

There are two endings, depending on whether the player manages to have Victor survive or not. None of them is a 'good ending' or a 'bad' one per se. Dying actually reveals more about the background plot. Surviving, on the other hand, requires the player to solve the one and only mandatory puzzle in the game. There is one more puzzle, but that's completely optional. Apart from that, everything either happens automatically (triggered by time) or the player is actually told what to do.

Now, usually, I'd complain about such game design, asking whether the author forgot the 'game' part. However, The Duel in the Snow does a pretty good job of keeping up the illusion of interactivity and player freedom. There aren't many rooms, but just enough. There's some stuff to tinker with. And there's progress which at least seems to stem from the player's actions (even if it isn't).

So, purely narrative 'interactive' fiction can indeed work! What makes this game's plot good is its courage to not spelling everything flat out. There are hints towards why Natasha has left Victor all over the place, but piecing them together only really works in death. The author chose to keep the game completely consistent on this point: Experience from past lives can't be used by the player. Even with the knowledge gathered by the former death scene, new suspicions can't be acted upon on replaying the game. Whether this is good or bad, I'm not sure. It's consistent, because it seperates player and character knowledge, but it can also be frustrating for the player. However, that's the only possible serious complaint. The game is definitely worth the time required to spend on it!

This game was a contender in the Interactive Fiction Competition 2009 where it placed 6th out of 24. 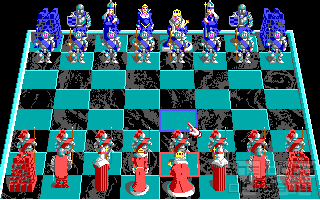