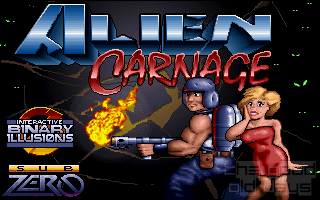 Alien Carnage, also known as Halloween Harry, is a sidescrolling action platform game. The story is that the earth is being taken over by aliens and the alien leader tells the goverment that if they do not surrender the planet in 24 hours, innocent civilians will be taken hostage and turned into zombies to help take over the planet. Harry is called upon to help save the people held captive by the aliens and to destroy the alien menace.

There are four missions to choose from: office, sewers, factory and last the alien ship, each level you go around shooting aliens and zombies while getting intel from your boss Diane. With only three lives you can't exit the level until you save all the hostages on the level needed to be saved and every hostage you save gives you more health to fight and the hostages are hidden or you have to flip a switch and that can be kind of annoying when all you want to do is get to end and the elevator is still closed.

You start with the flame thrower and jet pack, the jet pack makes it that much easier to get from one place to another, but when it runs out you have to refuel it by buying it from vending machines with the money you get killing zombies and aliens, if you run out of money to buy fuel then you can't get to some places and then its game over, the flame thrower uses the same fuel as the jet pack so if you run out of ammo then no jet pack.

You can get more weapons by buying them at vending machines like a proton gun, missiles and nukes, buying different weapons can help you save on fuel for when you need the jet pack. The last levels of the missions all have a end boss you will have to fight.

In my opinion the gameplay is good and the graphics are nice and the music is great too, I still have the music in my head after playing it.

Pitacas:
Amazing Game. Brings a lot of memories. Thanks
Zeyu:
Feel free to share anything about Alien Carnage (1994) here!
[Reply] 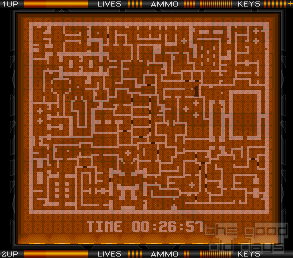