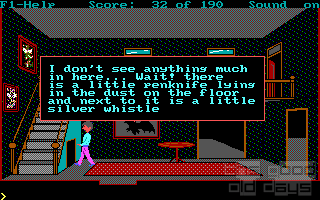 The big shareware boom started by Apogee in the late 80s was not equally applicable to all game genres. Adventure games, for instance, are not as easily split up into logical episodes as some other games. Hugo's House of Horrors tried it anyway, though the shareware version is actually complete as far as plot, puzzles and locations go. Instead, developer David Gray promised additional features, such as “auto-play” to users willing to register – i.e. an option to watch the game solve itself, as if it were a movie. Hard to believe that this would have prompted people to pay, but it seems to have worked out. After all, the whole series is still available for sale.

What the shareware distribution model did ensure was an unheard of international distribution. The game eventually got into the hands of virtually every PC-based player on the planet. For a number of people, it may have been one of the first games they ever played. Leading to a nostalgic cult following to this day. This nostalgia making it a hard game to actually revisit, because unfortunately, by objective standards, it's really rather… crap. 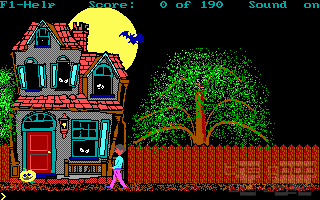 One of the nicer visual impressions

Graphical quality is strangely inconsistent. Standard cliparts have been thrown into the pictures in prominent places, and those are actually the parts which look best. The limited EGA colour palette regularly makes parts of the Hugo sprite disappear due to carelessness when picking those colours. Scenery being three-dimensional, the perspective angle of objects is frequently off.

The underlying game system is visibly inspired by what Sierra applied since the first King's Quest: Hugo is moved around using the cursor keys while commands are entered through a text parser at the bottom of the screen. This was something players were still used to at the time, but of course, it comes with the usual baggage of such a system. Namely, and this was something Sierra also never got right since their own very beginnings, the dissociative break between graphical illustrations and text input/output system.

You see, in classic text adventures, including those where illustrations are just optional fluff, there is one major rule: whatever terms the game uses to describe its scenery, you can be pretty sure will be understood when you use them in your input. There is a certain elegance in this balance. This balance is missing in Hugo's House of Horrors. You see a pixelized something on the screen and the designer just expects you to recognize what it is and refer to it with the same synonym he has considered. Plenty of room for failure. Failure not due to hard puzzle design, but simply due to issues of mechanical interaction, which is exactly where a game should not be hard. 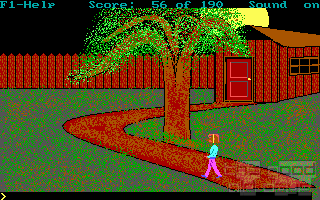 Not so good looking

Nevertheless, none of this is really the main complaint. Neither are the dead ends or the gratuitously random deaths. All of it is somewhat mitigated due to the game's brevity (~30 minutes even if you don't know what you're doing), making repeated runs not so much of an issue. The anarchic charm of the fortuitous mishmash of thematic elements (the mad scientist with his experiments, the dog actually being the greatest danger in a house inhabited by a vampire, a witch, a mummy and other monsters…) even makes it all sort of likeable.

No, the main issue is really that this inventive edge does not at all apply to the puzzle design. What is expected of the player is finding hidden objects, opening locked doors with obvious key objects, finding hidden passages, avoiding deadly creatures, answering trivia questions about fantasy literature (!) and otherwise doing the blatantly obvious. There isn't a single even semi-orginial puzzle throughout the whole game. Truly sad.

What is it that makes Hugo's House of Horrors prevail in today's collective mindset, then? The answer is implicit in all the preceeding paragraphs. It was there in the right place at the right time to engrave itself in people's impressionable, young minds. The level of challenge was right for kids who could feel smart when entering the “secret” code (openly readable on the mirror) into the one combination lock in the game. The haunted house theme was somewhat thrilling, but the humour took enough edge off it. It was “good enough” and “available”. Though in all honesty, I strongly recommend to keep those treasured memories the way they are and not put them to a test.

Hugo's House of Horrors is the first of three text-controlled adventure game created by Gray Design Associates. The controls are similar to the Sierra titles of the same style. You use arrow keys for character movement and you type in commands to complete tasks. The parser used for input is very limited, but this isn’t a problem since most parsers of the time suffered this same problem.

In this game you play as Hugo who must find his love, Penelope, who hasn’t turned up since she went on a babysitting job to a haunted house. Imagine that. If the haunted house wasn't a big enough clue already then you'll definitely notice something strange is going on when you get there. Mad professors, mummies, bats with a weakness for whistles, barking dogs, monsters and old men with riddles are just a few of the puzzles you'll have to solve before you can find Penelope and save her. But this is nothing a brave adventurer can’t solve with only a few items you can find littered around the very house you’re confined to. If you manage to reach the girl in time to save her from certain doom then you’ll be rewarded with her hand in marriage and ever lasting true love. At least until another mishap falls upon our hero. (WhoDunIt?)

Having played through this game again for the review, it seems a lot shorter than I remember it. Of course, I only went for the ending and not for completion which I’m sure shortened the experience a little. I’ve found it can easily be solved in ten to fifteen minutes if you know what you’re doing. Maybe thirty minutes if it’s your first time. Even for it being such a short game, I still found it very enjoyable to play through.

klaxmaster:
I accidentally discovered this in ye olde AOL game search long ago. It was quite difficult, and I required help from online forums to get through. Still a nostalgic experience, that's not un-enjoyable.
Mr Creosote:
Kind of funny, but lots of instant death scenes, pixel hunting (in the form of being forced to search for the exactly right spot to stand for a command) and, as mentioned in the review, general shortness make this nostalgic, but somewhat flawed experience. Still the best part of the series.
[Reply] 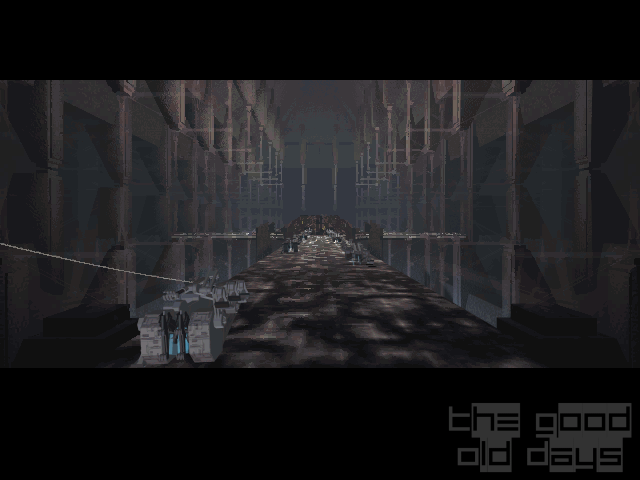