The Barber of Sadville
for Interpreter (Z-Code) 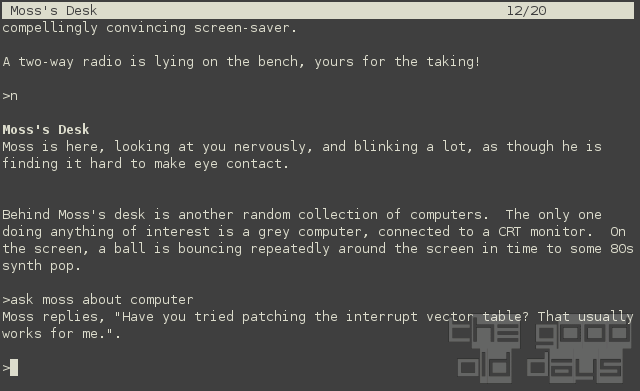 There's this TV series called The IT Crowd. It's quite funny. Probably the best current series. It's about these two IT support people (Moss and Roy), their 'relationship manager' (Jen Barber) and (occasionally) other people from the company. The series sets are full of all this so-called geek stuff (posters, comicbooks, old computers,...) - and on the series 2 DVD, there was a hidden contest to find some hidden easter eggs. Some of these were hidden quite well (one, for example, involved recording and decoding a flickering bar code). One of these easter eggs turned out to be a little text adventure... which this review is about.

Turns out it is a Z-Code game written in Inform 7. Z-Code version 5. It's very hard to squeeze an Inform 7 game into Z5 - it's usually either simple one-room-games or games suffering from severe under-implementation. The Barber of Sadville implements the whole basement as found in the series, but there is hardly anything to be found in the rooms. Objects mentioned in the room descriptions can't be referenced, not much is going on. That certainly explains the size.

Jen takes over the role of the protagonist (though even that only gets clear halfway into the game) and the goal is to pick up computers of all kinds. These can be found all over the set. Most aren't hidden at all, they're just lying around. Yet, getting them is most puzzling. How is that? Well, the computers aren't really named. There only a small description and you can't refer to them by 'computer' or anything along those lines. From the clue, you need to identify them and call them by their brand and model names. So what we have here is pure knowledge puzzles; either you can solve them, or you can't. There is no middle ground. The rest of the puzzles is just like that. Either you know are intimately familiar with the BBC Micro or not. Either you know what magic words are used for teleportation in genre classics or not (nice to see it's not xyzzy for once, though). Considering that some references are quite arcane, the game is nearly impossible to solve.

In fact, it's even the lowest form of knowledge puzzles, because they're not properly integrated into the game world; the solely rely on the indirection of the game's interface (the parser). There is no reason why the protagonist (Jen) wouldn't know which computer to pick up - she has already seen and referenced it individually (in the role of the narrator) before. So a game reply like 'there are various computers here' doesn't make sense. The only reason the player can't tell her is because of the arbitrarily restricted vocabulary understood by the game.

In some games, a distance between protagonist, narrator and player is used to a great effect. Though the good games making use of this trick always give a good in-game reason for separating the three roles. This game doesn't. There is none. Purely arbitrary.

What people would play this for is, of course, series references. Apart from a few one-liners from Moss and Roy, there is little to see here, unfortunately. Of course, 'have you tried turning it off and on again' is there, but not much more. Roy even seems to randomly disappear at times, but Richmond makes a short appropriate appearance at least. Certainly, it's a must-play for every fan of the series, but - no use beating around the bush - it's a bad game. Nevertheless a very nice easter egg - way better than the usual lame crew photos! 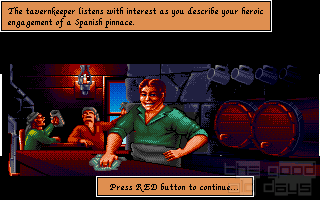