Ski or Die
for C64
Also available for: PC (DOS) 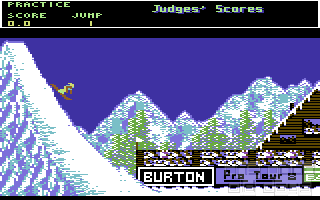 Of course, the makers of this game are virtually setting themselves up for reviews concluding “if this game is any indication of what skiing is really like, I'd rather die”. Then again, the predecessor Skate or Die! did well and it triggers mostly positive memories. So maybe the risk isn't all too high. Yup, the game sticks to the proven formula - so that's an unlikely conclusion to come to.

Again, there are five events waiting to be enjoyed. Snowboard Half-Pipe has the player boarding (?) down an oversized bobsleigh track trying to impress a cynical spectator with small jumps and other stunts. Innertube Thrash has two contestants racing sitting on large tires. This is a lot of fun as the vehicles are bouncy (especially when crashing into each other), so keeping control is hard. In Acro Aerials, the player does artistic trick jumps which are then rated by a number of judges. Downhill Blitz is fairly straighforward downhill skiing (with a few alternate routes). Finally, there is Snowball Blast: The player has to defend his ice fortress against an army of attacking kids armed with snowballs.

Downhill isn't very good (or maybe I just suck at it) as collision detection is way too strict. Half-pipe and the aerials represent pretty much what players are used to from the previous game. The tube race and the snowball battle are my personal favourites in this collection, though. The whole idea of simulating a snowball battle in a computer game is just crazy - in a good way! I only know of one other game which ever tried this (I've forgotten the name, though - contact me if you know any).

Ironically, Ski or Die has got much more of an anarchic quality than Skate or Die, and it's not even the pseudo-cool snowboarding factor responsible for this. Instead, it's indeed the two 'silly' events with the innocently childish quality which make this one the better game in the end. The only downside: The music is nowhere near as good as in the predecessor. A minor quibble.

Mr Creosote:
Feel free to share anything about Ski or Die (1990) here!
[Reply] 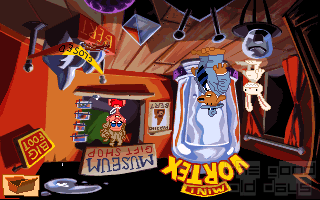