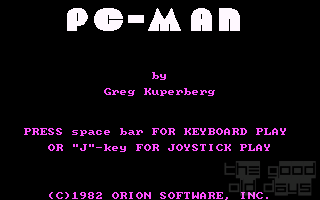 One of the first pacman varieties for the PC, and it still runs without a slowdown. It has all the elements you've come to expect from a pacman clone: the ghosts, the dots, bonus fruit etc.

It also comes with sound, and quite nice sound at that. This game, however, has one thing most of the other clones lack: addictiveness. It's actually fun to play, and really gets you back into those arcade spheres. One tiny thing is different: I don't remember a ghost in red and white blocks, but that's probably just my graphics card playing up. Or the latest fashion among ghosts.

Anyway, why is it better than the others? The maze is more or less the same, and no gameplay novelties have been added. Ghosts aren't predictable, but don't really seem to chase you for very long. Well, maybe it's just that I played it when I was younger. Maybe it's something else. But it's just more fun!.

Enough whining, back to the point. The graphics are very well done, with multiple colors. The controls are the same as in any other pacman clone: use the keyboard. The game also has joystick support, but I didn't have the chance to test that. One gripe that I've only had with this keyboard is that sometimes it doesn't respond very fast. It only seems to happen in the bottom left corner of the maze.

The difficulty is something that must be noted. The ghosts move MUCH faster each level, and will not be edible for long, especially on the higher difficulty levels. The bonus fruit changes each level, and that water melon actually looks tasty! When you eat a ghost, it's eyes will move back to the central chamber they come from. Sometimes, the pathfinding there is bad, so that the ghost will take up to a minute to arrive there, all the while fruitlessly searching for it.

So, what's the final verdict? If you copy a game, do it this way. KEEP THE MAGIC FROM THE ORIGINAL! That's why this game gets a 4/6, even though it's a copy. 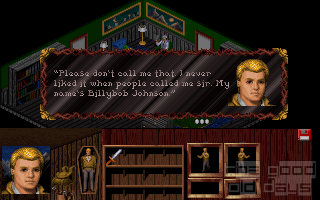