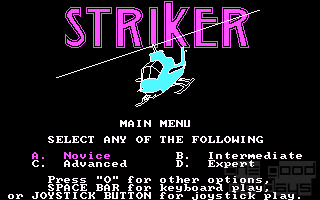 Striker is a game quite like the Vectrex game “Scramble”. You control a chopper over hostile territory, and you must defend yourself against just about everything from turrets to giant bats, using only your bombs and bullets. Also, you have limited fuel, and the only way to get more is to blow up refineries along the way.

The graphics are great for its time, and the maker even added two color schemes to support different graphics cards. Also, there are four difficulty settings. As a novice, you'll rarely encounter any flying enemies, but as expert, you'll have to wade through thousands of them. The guns of enemies are quite accurate, so don't expect to get far for the first hour. It takes quite a lot of practice to become good at this game.

There is a highscore table, and it remembers even when you exit the game. Of course, it's resettable. The controls are easy and intuitive for all who have ever worked with old games, and a joystick is supported. The sound is also amazing for its time. PC speaker, but there are sounds for everything from shooting to crashing. Of course, nowadays there are many games that look better. However, they do not always compare favourably to this game. In difficulty this game beats most of them easily.

I advise this game to hard-core gamers who aren't afraid of a challenge. Something that must be noted, however, is that you need to slow down your PC-a lot. My own pc (p3 1GHz, 256 Mb RAM) can't run it. Not even when slowed down by 99%. I played using a DOS emulator. DOSBox works best.

The game comes with documentation, which explains most of its features much better than I can.

It's an obvious proof of the fact that games don't have to be 3D to be fun. Also, this review wouldn't be complete without a big “thank you” note to Ardell, who has restored the game into existence after deletion and corruption. Without him, you wouldn't be able to read this now. I give this game a well-deserved 5/6 for its excellent features in a time where that was quite uncommon for PC games. 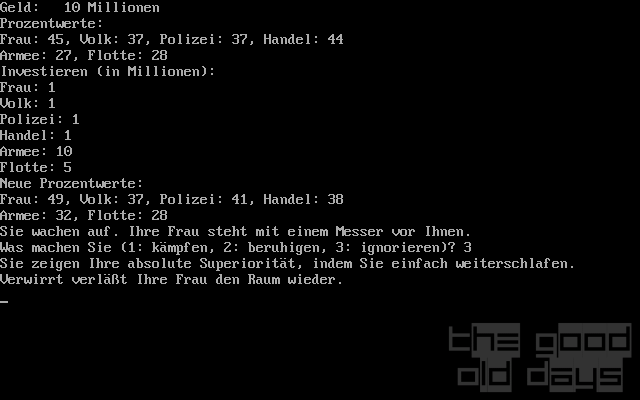