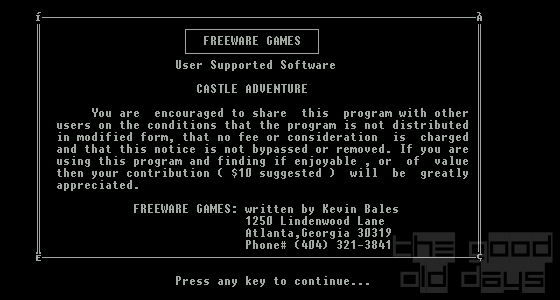 One of the most memorable ASCII games of the bygone BSS era, Castle Adventure is a fun parser-based maze adventure designed by Kevin Bales, and later released (“stolen” in fact) by Keypunch as part of their Swords and Sorcery package (see below).

Similar to Atari's Adventure and many other early Adventures/RPGs, your objective in the game is to collect all valuables and complete all given tasks. A perfect score is 1,550 points, but it is possible to finish the game with lower score. Although the game looks like a very out of date title, with ASCII characters and simplistic gameplay, Castle Adventure is actually both more memorable and deeper than most ASCII games of the time. For starters, room descriptions are quite detailed and well-written. Second, the game is played in real time, which means monsters will not wait for you to type something before they attack (as it would be in a turn-based game). This makes fighting appropriately exciting. Lastly, the game is much deeper than most other maze games because it has puzzles. These require you to type the right commands into the parser, like in a typical text adventure, such as “show cross to vampire.” Although most puzzles are obvious, there are some obscure ones that will stump you for some time. In a nod to RPG genre, you can only carry a limited number of items at any given time.

All in all, Castle Adventure is one of the best examples of what an all-text, freeware game coded way back in 1985 is capable of. If you miss the days of BBS, here is something that stands the test of time. Highly recommended!

Note: The subsequent Keypunch re-release (with name changed to Golden Wombat) was illegally included in Keypunch's Swords and Sorcery commercial release without the author's consent.

If this review had a title, it would be titled: “How to look for nice parts of a game”.

The game in question is an adventure with very basic ASCII-graphics. It's been written by a single person, and uses a very basic parsing system. It won't understand many inputs. Always use two words, and keep trying until you get there. The story is a fantasy cliché, you're trapped in an evil castle and must escape, using a variety of keys, weapons and other objects to do so. You'll be fighting evil monsters, etc. Nothing new there. Sometimes it does remind you just a bit of a so-called “action RPG”, but without the stats. This is due to the rather large amount of monsters that need slaying. Also, the text commands that can be inserted are rather unintuitive sometimes, so a bigger explanation might have been nice.

Another gripe: the screen is too empty. Uninteresting. The info you do get can be quite well-atmosphered, though. The “I don't know that command” sentences counter that with their repetitiveness. Movement's done with the arrow keys, and fighting's mainly running into stuff. In that way, it reminds me of Deadly Rooms of Death. The resolution of the game is quite strange, as the screen is higher than it's wide. I haven't encountered any games that have that. The game seems to be a blend of genres, but doesn't excel in any of them. Strangely, other people (www.mobygames.com) didn't think this game was that bad, really.

So, what am I missing? I don't know. Apparently, this game is fun, but I don't see it. I'm not a big text adventure enthousiast. I need to have at least some visuals, therefore this review may be harsher than the game actually deserves. I'd really appreciate a second opinion. So, am I too harsh or not? 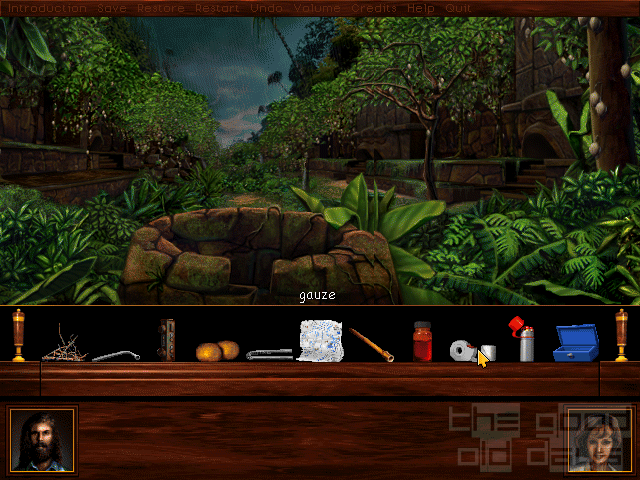