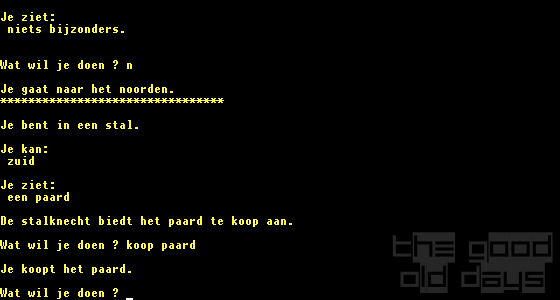 Now, I'm certain I saw this game in English on Home of the Underdogs, but now I can't find it anymore. Too bad for all you non-Dutch readers, because the only variant I have is in Dutch.

It's a text adventure, where the player has to find the Golden Chalice. Drink from it, and you become immortal. Then all you have to do is come back safely. The game has a classic fantasy setting, and is written completely in gold text-quite a nice touch. Also, very clear and easy to read. The title screen is graphical, and maybe the end game screen too. I don't know, because I haven't finished it yet.

The interface understands a lot (at least the Dutch version does), but is not always clear on reasons, for instance when I wanted to buy a horse, it simply said “you cannot do that” instead of “you don't have any money”. Apart from that minor gripe, the monsters are quite original, the puzzles not too hard and not too easy, and the story component quite well done. The golden chalice is one of the very few text adventure games I like. Usually, I get frustrated within 15 minutes. Here, I don't, because almost all commands are explained quite clearly at the start of the game. Also, the story keeps me interested, for some reason. This is a clear example of how a game should be programmed: with attention to detail.

Of course, I do have some minor gripes with it: I haven't got a clue who I'm playing. No background or reason I'm going for immortality. That might have added a little more depth. Not everyone will agree with me on that, because they like to think up their own history, but I'd like at least a few pointers. Also, a few commands could be clearer, like how to mount a horse. Still, this game deserves a chance. It's one of those few games that are not only well programmed, but also well translated (no AYBABTU's here). And the developers actually gave the LOGICAL puzzle solutions the upper hand. I've seen plenty of games ignore logic completely. Why pull a lever when you can hang a basket of turnips from it? That sort of thing.

Yet another advantage to it is that even novice players will be able to go quite a way before they run into difficult problems. So, if you understand Dutch, go play it! 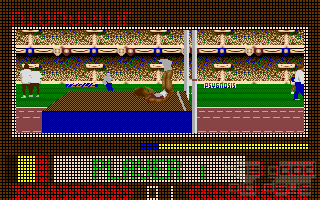