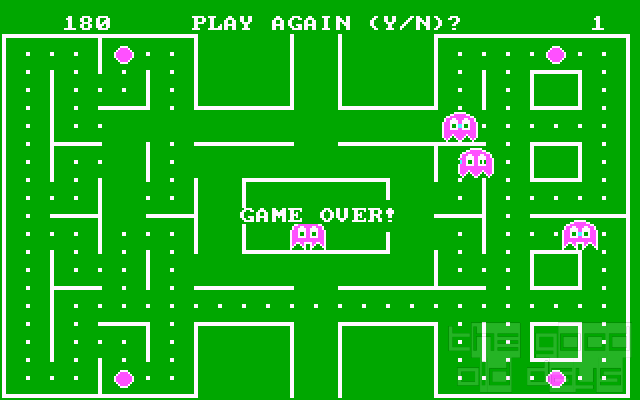 This game is a solid Pacman clone from 1987. It has all the standard elements, and not too many (if any) new ones.

You control Packman in his never-ending quest to get all those dots. Why he wants them: beats me. Four ghosts always want to get you: stay out of their way or eat one of the big dots and start eating them. Occasionally, bonus fruit appears, eat it for yet more points. The objective, of course, is to get as many points as possible. The four ghosts have the exact same color, so they can't be distinguished. If you get all 180 dots on a level, then you go on to the next one.

The fun part here is that the difficulty actually increases, namely you become slower and the ghosts faster. The ghosts follow a searching algorithm until they see you, then they chase you. In this game, you can actually shake them off.

The game features PC speaker sound. It's nice, but repetitive and may drive your fellow housemates (if applicable) insane. Not as bad as Paratrooper in that respect, but still nasty.

The game was rescued from an old floppy disk from which it had been deleted. It apparently survived its non-existence quite well. Sadly, the same cannot be said about the manual: it misses a page. Still I uploaded it, because it gives some nice gameplay hints.

One big mystery still exists: who wrote the game. It lacks a title screen, and the part of the manual that vanished probably contained the name of the maker. The year of publication is an estimate based on last file change date.

The controls are, of course, simple: just use your arrow keys. To end the game, go game over and choose N. I couldn't find any functionality to end the game prematurely, and no button to turn off sound either. 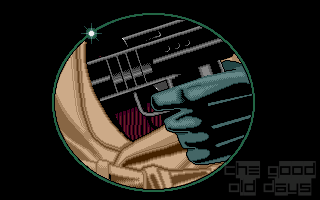