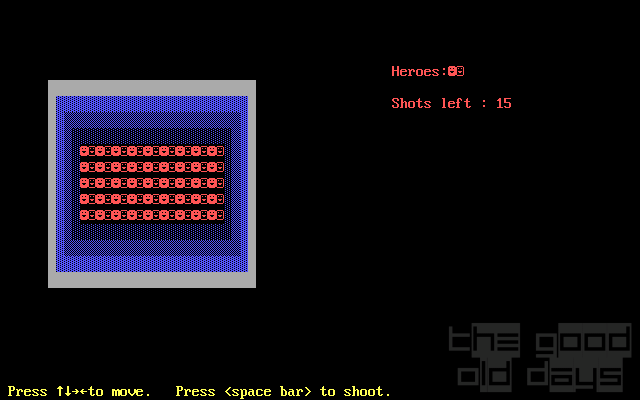 Set the Hostages Free is an extremely rare and comparatively ancient action game that casts the player as the liberator of up to ninety of the ASCII, title characters. The program uses the PC speaker and color graphics, featuring also the monochrome mode.

The game has three difficulty levels (Private, Lieutenant, and General), which determine the number of opponents your hero encounters with each successful rescue. The hostages are represented by the faces on the left-hand side of the screen. They are surrounded by three layers of blue shade characters (i.e., walls) and circled in a clockwise direction by two full blocks.

In order to accomplish the specified task, you have to move a tank along the path around the enclosure, and time the shots so that you hit either of the above-mentioned blocks, making an indentation in the adjacent outermost blue layer. Therefore, you have to hit the same column or row thrice, so as to rescue five or eighteen of the remaining hostages, respectively.

There's no time limit as such, but the player has a total of three heroes (i.e., lives), each with only 15 shots of ammunition. Apparently, you earn exactly 77 points for everyone you free, regardless of how many moves you make in the process, which leaves unexplained the significance of the latter number and the reason for its inclusion. In addition, for a program that uses the word 'score', there's a distinct lack of appropriate functions that would facilitate the conventional recording of one's achievements.

Set the Hostages Free is by no means a difficult game, however, especially if one adjusts the CPU cycles on DOSBox, as it compensates for minor technical deficiencies. The opponents in the game are, unfortunately, pretty much unstoppable, meaning that the player can waste ammunition to make them reappear momentarily at their default locations. Resourceful players would undoubtedly develop their own strategies; for instance, targeting the five rows simultaneously. 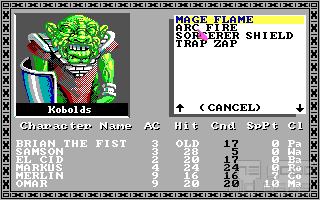