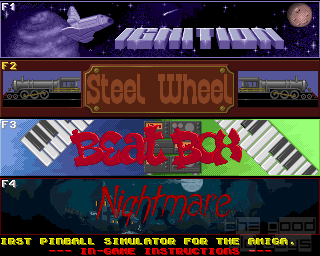 I assume everybody knows how a pinball game is played, that is why I'll describe the available tables instead.

The worst comes first. Ignition is about launching a rocket into space. All targets are loosely connected with the 'preparation'. This table suffers from its extreme emptiness. There isn't a single ramp, just two lines on the left side which can't be counted, though. The important targets are a few letters with which you have to complete words. Again, there are only very few. The worst: one set of targets is placed directly into the centre of the table - you can hardly avoid hitting it! Not very hard to play, but incredibly empty and dull.

Dedicated to railway pioneering in the USA. You have to 'drive' your steam engine across the country. The table is laid out quite well with accessable ramps and harder to hit targets which help the 'story' along. Keeping the ball in play is quite easy, but scoring big points requires hitting the right combination of targets: activate some bonus at one spot, get it somewhere else. Steel Wheel is definitely the highlight of the collection. Not repetetive hitting of the same targets, but very different moves are required.

The world of pop music: produce a song and sell it to the dumb masses. Beat Box has more targets and ramps than any of the other tables. There isn't a single millimetre which doesn't trigger anything! No matter where you shoot, it'll never go to waste. May sound good, but actually, it is overloaded. Blind shooting is rewarded. There are always many blinking lights (too many) and the ball spends too much time rolling along the long ramps with their many different ways. That results in too little action for the player.

A dark cemetery, ghosts, zombies, bats and so on. The obligatory dose of horror. The middle of the table is a bit empty, all the targets and ramps have been put into the upper part. That makes the table look less crammed and gives the ball the chance to roll freely for longer. Nice use of harder to hit areas at the side of ramps. Nightmare would measure up to Steel Wheel, if it wasn't for the really strange and unrealistic ball physics occuring on this table. Strangely enough, it doesn't affect the others in the same way, but here, it is really bad: the ball is suddenly speeding up, it's bouncing back in impossible angles, sometimes it's even changing direction without any visible reason!

As you probably already noticed from those descriptions, I'm not too fond of Pinball Dreams. It mostly gets lots of praise whenever it is mentioned anywhere, but mostly undeserved! The tables are somewhere between being boring and frustrating. The 'theming' was a good idea, and the good graphics present this very well, but the playability is sadly only average. You're better off with one of the sequels.