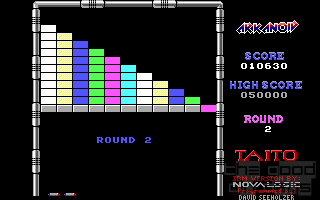 Even though there's obviously effort to explain why we're doing what we're doing in this game it seriously does not matter a single bit. The idea behind this game is that you control a paddle which bounces a ball at bricks which disappear when hit. Your main priority should be not to let the ball go through. If it reaches the bottom you lose one life - if you lost every lifes the game is over. If you manage to clear the level you advance to the next one.

But that is just the basic idea. There are some extras. For once not every brick disappears on first hit, some need more. But more interesting are the goodiepills that are dropping down sometimes when a brick disappears. Their effects vary from slowing down the ball to giving you the ability to shoot. Also it is possible that you get two extra balls, your paddle increases in size, becomes sticky and some more. Those are just the more useful ones. Usually these effects don't stack - so in case you use another pill (and sometimes you just cannot avoid it as they are just dropping down and might be in between you and the ball) the previous effect is lost. There seems to be just one exception: In case you used a slowing pill the ball will stay slow when you use another extra. It does not work the other way round though - if you have another effect active and you slow the ball down the other effect is gone.

So much for the rules - apart from knowing all this you should also know that there are sometimes some sort of “monsters” which do not mean harm to your paddle, in case of collision they are destroyed, not you. The problem with these little buggers is that they change the direction of the ball when it hits one of them. The new direction is somewhat random which can be a problem - especially when that happens near the ground.

The game itself has 33 levels - in the last one you have to defeat Doh. Doh is the bossmonster of the game - if you defeat him you will get to know that he is supposed to be a “dimension-controlling fort”. Whatever that means... at least he looks like one of these stoneheads from the easter island - but painted in a nice bright red.

Arkanoid is your classical arcade game. There are few games that are suited better to describe that term. If I think of those big bulky arcademachines of the 80s I imagine them featuring Pac-Man, Space Invaders or... Arkanoid. For some reason this game always seemed to be more an original than the “real” original Breakout. Of course that might have to do with me just having played Arkanoid first. Maybe...

When I started the game to check it again before the review things I felt a bit weird. It was still the old game, but I just thoroughly sucked at it. Now I don't remember myself having been exceptionally good at it or anything but I constantly kept dying in the first two levels (the screenshot from level 8 is just from the demo). But don't worry - the game is not all that hard, it's just me not being very good. I guess I just had better reflexes when I was younger. My lack of success might also be a main reason that I did not enjoy the game all that much anymore. It's a bit hard to rate the game based on this of course. A good deal of the rating is my memories. Of course considering the time the game was made in and it being a true classic (to me at least) influenced it. Still - as it's a clone and (considering my own feelings to it at the moment) not something really everyone will enjoy I cannot rate it higher than 4. If you like games of this type you can't go wrong with it though! 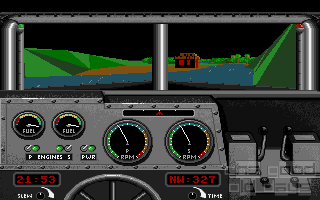