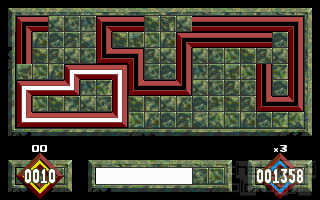 A puzzle game... one of those with time limit... one of the “complete structures” sort. Ah. Business as usual, Tetris rip off. Right? Well, no, not quite. There are some similarities in the concept, but the gameplay is vastly different.

But let us start at the beginning. The basic idea is simple: You get random tiles and you put them somewhere on the floor. These tiles seem to resemble pipes of various forms. Now your goal is to connect these to loops (giving you bonus points). If you cannot place a tile you lose a “life” - if you have none left the game is over.

There are three modes of the game. The first mode would be the one I'd recommend. It picks up the Tetris idea and lets completed loops vanish. You just play for points here. The second mode is very similar, but completed loops don't vanish - instead upon reaching a certain score you advance to the next level (which gives you a clean board). This of course requires different tactics as you will block yourself more often than in the first mode.

The third mode could (and should) have just been let out. It's basically sort of a memory game. A prebuilt structure is shown and tiles are taken away from it. Now these tiles reappear in random order and you have to place them at the right spot. Totally different game if you ask me - and not the slightest bit interesting (to me).

Now the basic idea of this game is not new. It reminds of Tetris a lot, but you can plan ahead in better ways. A very similar game came out a year before Loopz though: Pipe Dream (also known as Pipe Mania). So... I have to subtract points for the idea as such - this game is not the first picking up this concept. Of course it's slightly different, it's not a real clone, but anyway.

If you like puzzle games this one is for you. It's one of the sort I like best: Very easy idea worked out very well. And that's just it. A great example of this category. 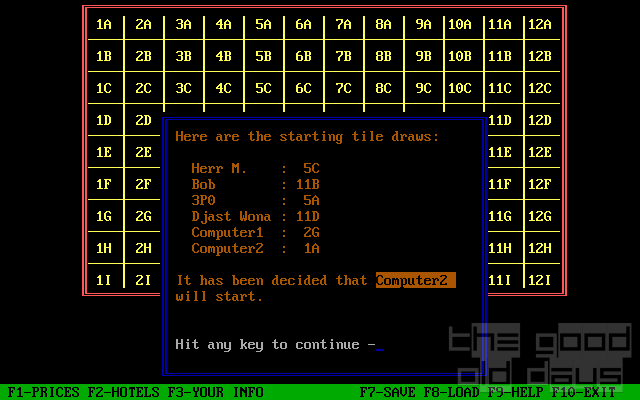