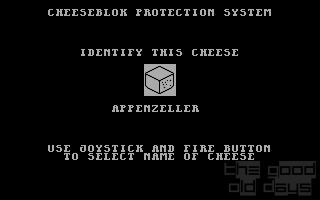 My brain hurts! A Gumby stars in this genre combo from British publisher Virgin Games. Following the stream of consciousness logic of Terry Gilliam's cartoon bits found in the series, the Gumby's head is planted on a fish body for some levels and re-attached to his human body later again (only to be put on a bird later), so that the player is treated both with Jump'n'Run and (underwater and aerial) Shooter parts.

Graphically, the game is somewhat reminiscient of the cutout technique Terry Gilliam used. That's a big plus. Just like the weird Pythonic creatures which appear as enemies, the Pythonic surroundings and other Pythonic elements (watch out for the giant foot, the 16 ton weights, extremely vicious 'keep left' signs or Spanish cardinals throwing soft cushions).

Yes! Whenever bicycles are broken, or menaced by International Communism, Bicycle Repair Man is ready! Ready to smash the communists, wipe them up, and shove them off the face of the earth... Mash that dirty red scum, kick 'em in the teeth where it hurts. Kill! Kill! Kill! The filthy bastard commies, I hate 'em! I hate 'em! Aaargh! Aaargh!

Gameplay-wise, however, it's just standard fare. Fairly unexciting stuff with pedestrian level design and mediocre controls. There are hardly any extras like for example special weapons or abilities - all you'll find at times is life energy refills (most appropriately: cans of spam).

We interrupt this programme to annoy you and make things generally irritating.

Still, it isn't too bad really. It's not very hard - fairly slow for such a game in fact. If anything else fails, just remembering where the enemies come from in what situation is enough to get through. So it's an ok game, but it's just lacking these extra bits which make a game really good as opposed to ok. You know... splunge.

Wandrell (2010-07-19):
I recall playing this as a kid (I'm not sure I had even seen a Monty Python film back then) and getting the most absurd and weird game-related experience. It's a full of senseless game, but not much apart from that.
Mr Creosote (2010-07-18):
I'm not good or patient enough. Feel free to try. The whole point is to collect the pieces of the Gumbys brain, so presumably, if you collect them all, you get the 'best' ending.
T-Pow (2010-07-18):
I specially like screenshot nr. 25. Have you checked if there is a alternative ending?
[Reply]