The Case of the Cautious Condor
for Amiga (CDTV)
Also available for: PC (DOS) 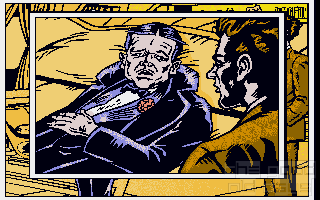 It's been many years since you've last heard from your old war buddy Bronson Barnard. You two had been flying together over France in 1917, you even saved his life there once. After the war, your lives drifted apart. He became a successful industrialist, you joined the police first, and became a private detective later.

That is why it comes as a bit of a surprise when you open his letter. He's inviting you to take part in the maiden launch of his latest invention: the Condor. The Condor is sort of the Titanic of planes: gigantic, fast, ready to cross the Atlantic.

On board, you meet an illustrious, but strangely mixed round of guests: a newspaper reporter, a Spanish casanova, an Egyptian prince, a nazi officer, a French wine producer and an American actress amongst others.

Shortly after takeoff, Barnard has a sudden heart attack. The plane is ordered to turn around. Only now, your old friend reveals the true purpose of this journey: one of the guests is the murderer of his son who worked as a customs officer. He wanted to expose the killer himself to show off to you. Now it is up to you to trace Barnard's research and complete it. But you only have 30 minutes until the plane lands again and the murderer walks off.

The Case of the Cautious Condor is an 'interactive comic'. The hand-drawn art is presented in overlapping panels. You won't get to see any speech bubbles, though, because all the dialogue has been fully recorded and is being played from the CD. CD? This was one of the first games for the CDTV (runs perfectly on any Amiga with a CD or hard drive, though), and one of the very few which actually used the medium.

The gameplay is simple: walk around the plane, overhear conversations between the other guests, search their cabins and eventually accuse someone of being the killer - before time is running out. If the names Deadline, The Witness and Suspect come to your mind, you're on the right track. CotCC is nothing but a graphical version of these classics. Just like Deadline, you have to be at the right place at the right time. Only then, you'll observe the important clues and be able to unravel the mystery. That means unlike puzzle-based Adventure games, you have to replay it several times to succeed (unless you're very lucky).

It is certainly worth it, because the detective story with its 30s style is quite interesting. The characters are stereotype cardboard cutouts - just the way it has to be. And even though every game is limited to 30 minutes, the overall time you can spend with it is quite high for an Adventure.

The voices are all well done, but if you're not a native speaker, you could have some problems understanding the various very strong accents. The graphics are quite good, but unfortunately, they could still be a lot better. The game could use more colours. It doesn't even use the full 32 colours standard palette! In addition, it restricts itself to NTSC resolution of 320x200. A common PAL of 320x256 would have already helped, and a HAM or Halfbrite-screenmode (for the non-experts: that's special Amiga screenmodes with higher resolution and more colours at once) would have graced it perfectly!

In spite of these minor glitches with the graphics, Case of the Cautious Condor is a very good detective Adventure, a worthy successor to Infocom's classics. Being a CDTV game, it's especially impressive, because for that system, it is almost without any competition! Almost all of the games for it were either straight disk ports (useless) or hideous 'movies' close to being non-interactive (a common phenomenon for every of the first CD-based systems). CotCC has stood the test of time, though - an enjoyable masterpiece even today.

Technical stuff: As mentioned before, this game uses NTSC screenmode. To play the game, you have to boot your Amiga in this mode (or set your emulator to it). A PAL screen will only result in a black screen. The downloadable version runs from a hard disk and can also be burned on a CD if you prefer that.

The version previously offered here contained a sound bug. You can now download a patch which contains instructions on applying it - there is no need to download the whole game again! If you downloaded the game after December 2nd, 2004, you should already have the fully patched version anyway.

Mr Creosote:
Feel free to share anything about The Case of the Cautious Condor (1991) here!
[Reply]