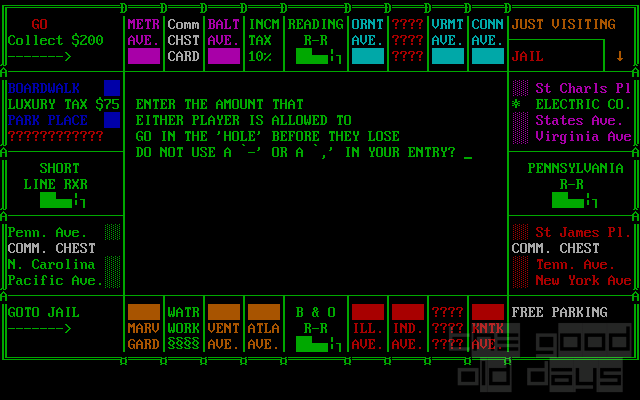 Monopoly... Monopoly... what was that again? Ah come on - you KNOW what Monopoly is! It's the pure capitalistic board game where you buy streets, railroad stations and similar and build houses and hotels charging your fellow players money if they dare to cross your streets. Sounds a bit... strange explaining it like that, but basically that is how Monopoly works. The players roll the dice and the street (or building) they land on can be bought if noone else owns it - if the latter is the case... it is indeed as I said before: You have to pay for setting your foot on it. If you own the street you land on you can build a house there - or a hotel if there are already four houses present. If you land on a railroadstation or the electric or water works you cannot build anything there. That's the rules in a nutshell.

Of course there have been zillions of versions of this game for the computer. What we have here can probably be best described as an interactive fiction version of the game. You do have the board before you while you play, but everything that happens on it is just relayed to you in text form. You don't even see where on the board you are. You can look at the possessions of each player at least by pressing a key, but that's it.

The game as such is not bad - you always play against (exactly) one computer opponent who doesn't act as ridiculously like some I have played against. Of course - let's be serious about this - this game is not a game you will play again and again. You get a game here which wasn't made by a big company, but a single persoon who even released it as freeware. (Not that that would be a bad thing!) On top of that the game is from 1984 - and let's be honest: Even the most professional games for the PC at that time usually were ugly as hell!

Alright, summing this up I'd say this game is a piece of nostalgia and should be treated like it. If you want to show your daughter or son what daddy (or mommy!) played when (s)he was young this game might be a good example. It's okay to play it for a round or two - but the lack of comfort really gets annoying after a while.

Elwood:
Feel free to share anything about Monopolize (1984) here!
[Reply] 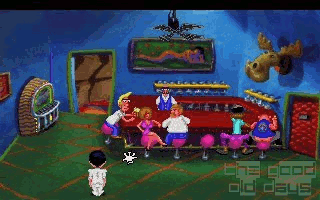