Beavis and Butt-Head in Virtual Stupidity
for PC (Windows) 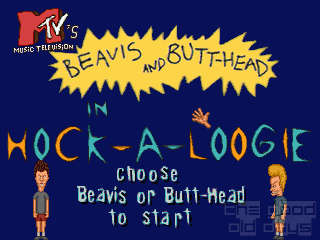 [Anchantia] Beavis and Butt-Head was a series which aired on MTV for the first time in 1990. It was invented by Mike Judge who later also became known for the series “Kind of the Hill”. Beavis & Butt-Head quickly became a cult hit due to its brute-ish humour, its simple animation style and the open criticism of our society.

[Mr Creosote] I might as well confess right now that this 'phenomenon' completely passed me by at the time. I was aware of the series' existence, but I never watched more than five minutes. And those minutes consisted of two guys sitting motionlessly on a couch, 'laughing' (or whatever you want to call it). So, I'd like to get one thing cleared up right from the start: Are the protagonists supposed to be 'cool' or are they 'idiots' whom we should laugh about?

[Anchantia] They were just idiots designed to make fun of the kids back then. It really struck a nerve there, they were both caricatures of metal fans. In the late 80s, bands like Metallica or Guns 'n' Roses brought metal music into the mainstream.

[Mr Creosote] Sounds reasonable so far, but you have to take into account that the satire which is universally understood as being one hasn't been invented yet. When the series was at its popularity peak, you could see a lot of teenagers trying to imitate Beavis and Butt-Head and getting the respectful approval from their peers. Such a reception usually feeds back into further productions.

[Anchantia] This phenomenon was later parodied by introducing the character of Stewart who wore a “Winger” shirt and tried to be just as “cool” as the two. It's quite common that popular a series leads to imitations.

One episode usually consisted of three music videos which Beavis & Butt-Head commented on. This was conducted from the sofa in the apartment where the two lived. The main parts of the show were short episodes which often took place at school or at BurgerWorld, their place of work. Typical plots involved: 1. The two are trying to score with girls which just gets them into trouble or 2. The two are trying to join Todd's gang, but they don't even notice that he's just humiliating and abusing them.

[Mr Creosote] Well, I can't really say much about the 'source material', but what we'd like to talk about today is a computer game: Beavis and Butt-Head in Virtual Stupidity. This game's story seems to fit within the pattern you described...

The game starts off with a typically American (i.e. hokey) 'disclaimer' telling us that these guys are not supposed to be role-models to be imitated. I call it hokey, because this kind of perception ('wow, cool') is of course still silently sanctioned. But back to the plot of the game: There isn't much exposition at the beginning, the game assumes the player not only to recognise the characters, but to know a lot about their background. A real 'goal' is never defined or at least not communicated in the course of the game.

[Anchantia] I've got to contradict you here. Right from the start, it's the goal to get into Todd's gang. This is what the whole story is based on. They are trying to get food for the gang. For that, they're stealing a panzer, getting arrested in the process and after that, Todd abuses them once again. This is certainly not an epic story, but it's exactly what the show was about. You're right on one point, though: The game is made mainly for fans of the series. This is obvious from the complete absense of character introduction to all of the insider gags. Aside from that, what did you think of the story as the whole, especially the gags?

[Mr Creosote] As I said, I found it rather confusing. The 'main goal' was never clear to me, might have been my fault, though. The individual scenes basically seemed to have been written individually, without many links to the rest of the game. The gags themselves sometimes worked and sometimes they didn't. For example, this army guy who appeared three times wasn't funny at all. Some of the slapstick stuff, on the other hand, was done very well graphically.

[Anchantia] You mean reaching the ladder in the gym, for example?

[Anchantia] The army guy, Bradley Buzzcut, is shown in a very shallow way. This is basically my main criticism: The game is a two men show. All the other characters like Tom Anderson or the hippie teacher Van Driessen only appear very briefly and have very few lines.

[Mr Creosote] I didn't even know the clichéd hippie was supposed to be a teacher, for example. The game didn't have any hint towards that. For most of the people you meet, it is basically unclear whether these are characters which Beavis and Butt-Head already know or they're strangers. Very seldomly, one little word was dropped concerning that.

[Anchantia] This is where the “fan game” aspect comes in again. Longer dialogues explaining a little more would have been nice. In general, nobody has bent over backwards for the script. This is also obvious from the game length.

[Mr Creosote] Good point: Players mustn't expect more than two or three hours of playing time. That was really little at the time of release. Which gets us to the gameplay itself: Basically, you get all the typical Adventure elements, from dialogues to puzzles (which mainly deal with giving specific objects to people).

[Anchantia] That was really very little. In some scenes, it became apparant that the developers must have been under severe time constraints. There are enough locations and characters in the game for it to be longer. They could have fleshed it out if they had had another few months. There are few puzzles dealing with the combination of objects. At least I found it nice that there were never too many objects in the inventory.

[Mr Creosote] The controls are adaequately simple, too: Basically, it works exactly as in Full Throttle: You get a few graphically 'stylised' verbs which are so few that you never have to think much which one to use. The dialogues, on the other hand, I found lacking: brief, hardly any topics and the interface didn't reveal whether a topic has already been covered to the end.

[Anchantia] The dialogues could just as well have been completely non-interactive. The idea of having mini games, however, were quite funny. Especially the target spitting and the ant roasting or the “tennis shooter” were very entertaining. This introduced a bit diversity.

[Mr Creosote] Maybe to quickly explain this point a little: There are four mini games which can be triggered within the main game. Winning one is mandatory, the others are purely optional. Never fear, though: the target spitting will not be the reason you won't be able to solve the game even if you're one of these people with low mouse dexterity! Once you've found the games within the game, you can also run them directly from the main menu. We already talked about the game's length, what did you think about the difficulty level?

[Anchantia] I've definitely known tougher brainteasers. The game is mediocre at best when it comes to puzzles. What I actually found annoying after all these years of not playing the game: Many items are quite small and hidden - for example the chewing gum at school. This reminded me of Der Schatz im Silbersee It's really a pity when a game attempts to make itself longer by pixel hunting.

[Mr Creosote] That's right, I had actually already forgotten about this again, but finding the chewing gum took me quite a bit of effort. Most of the actual puzzles, on the other hand, are simply errands which you're told about explicitely, so the rest of the game is nothing to write home about, either. On the positive side at least: There are neither dead ends nor any deaths.

[Anchantia] That would have disqualified the game completely.

[Anchantia] The cut scenes were actually made by the artist of the original series. That wasn't very common and quite illustrious for a Windows game of that time. At least they didn't try any stupid Macromedia experiments.

[Mr Creosote] Concerning the sound, I have to complain, though (unless you tell me I'm wrong): There is no way to get the game to display any text, you always have to depend on your hearing. This is really bad if you want to listen to some music while playing (or maybe just don't want to hear anything at all). In public, for example on a laptop, you can't play at all.

[Anchantia] That didn't bother me at all. The game's athmosphere would suffer quite a bit from disabling the sound anyway. The original voices, especially Mike Judge for the protagonists, make the game a lot better, don't you think? I wouldn't have laughed nearly as much about some of the lines if I had just read them.

[Mr Creosote] Yes, the voices are well done and everything, but as I said: What am I supposed to do if I'm sitting in a library, for example? Or on a train?

[Anchantia] Did you have the ways of playing the game on a notebook in 1995? PC games were played exclusively at home back then, simply because technology didn't allow for anything else. Also, who goes to a library just to play a Beavis & Butt-Head game on a laptop?

[Mr Creosote] Obviously, our lives are quite different here (of course, I don't go to a library to play a game, but sometimes, I am in one and I want to take a short, relaxing break). Displaying text is an essential feature for me - it's completely ludicrous not to have such an option which shouldn't be a technical problem.

[Anchantia] Sure, it is an essential feature. I just think that they didn't have the time to implement it. As I said before, it's obvious there are rough edges, that the game was published prematurely.

[Mr Creosote] Prematurely indeed. Which is sad, because what's there isn't half bad. Just not very mature.

[Anchantia] Exactly. Above all, more puzzles and more dialogues could have made the game into a true insiders' tip. That is because the ideas and the humor are there. For a licenced game, there is a lot of potential. What is your overall conclusion as someone who didn't know the series?

[Mr Creosote] I'd call this mediocre. It's not annoying which is already a quality in itself. Playing it is somewhat fun. Just that I felt in the end that the game took me for a sucker, being already over and everything. This would have been a good 'first alpha version', a 'proof of concept' which could have been developed into a 'full' game.

[Anchantia] I basically agree. For me, three hours are simply not enough for an Adventure game. Besides that, the shallow characterisation of most people bugged me. On the other hand, the game has great graphics, voice acting bordering to genious and some very funny and humorous moments. Fans won't be disappointed. Everyone else should rather have a look at the sequel, “Do U” from 1999. That one looked a lot more finished. Virtual Stupidity gets 3 points from me.

Mr Creosote:
Feel free to share anything about Beavis and Butt-Head in Virtual Stupidity (1995) here!
[Reply] 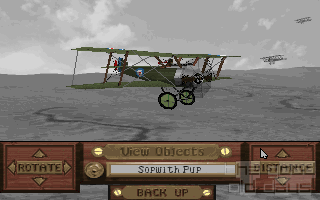