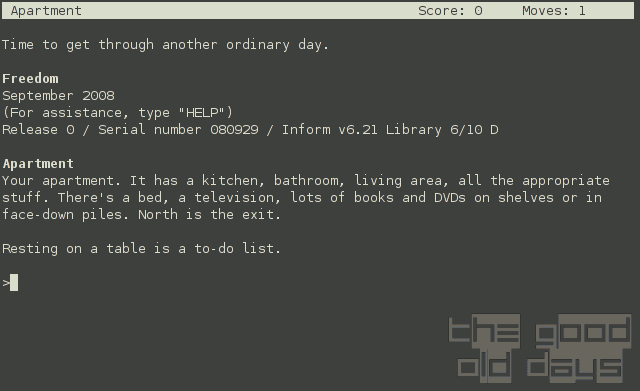 There are games which aren't very professionally made, but which have a strong personal message to them. Freedom is one of them. It is about a student suffering from social anxiety disorder trying to get on with her life. The actual tasks at hand might not seem very hard: buy groceries, check if a book you ordered has come in and attend a meeting at your college.

However, for someone like the protagonist, even the most mundane tasks can easily turn into nightmares. This is because she lives in constant fear of 'doing something wrong', everybody glaring accusingly at her and basically that nobody likes her. Every human interaction, no matter how small, incorporates the risk of bad things happening, often turning the people like this protagonist into awkward, insecure loners.

This is an interesting premise for a game, because it turns the normal into something horrific. The premise can only be applauded.

Unfortunately, the implementation of this text adventure isn't quite good enough. The game is very short and the problems the protagonist is faced with just don't seem to be horrific enough. In one scene, you're supposed to pay for your groceries in a supermarket. There is an express lane, a normal lane and an automatic checkout line. The express lane is only for customers buying three items or less. If you get in there, people will shout and glare at you. Of course, this is an uncomfortable situation, but the game didn't let the player inspect how many items she had bought, so there was no way of knowing whether she could rightfully enter this lane or not beforehand!

Probably the best scene deals with crossing the street. The street seems to be quite broad, the fear that the traffic light might turn to red rises with each step you take and the cars are already roaring to get a jump start. This is pretty realistically made, but not enough for a person not affected by such a psychological problem to really understand what the actual problem is. It could have been perfect if the subjective perception of the street the protagonist changed halfway across, the target seemingly getting furthing away than it looked at first, making even this crossing a truely frightening experience.

So, while the gameplay is not something which could really be called 'fun', Freedom does tackle an important and interesting psychological issue. For the idea alone, it's worth playing, even if it's almost certain you'll end up disappointed by the actual experience 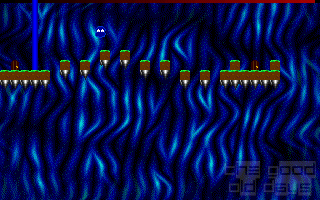