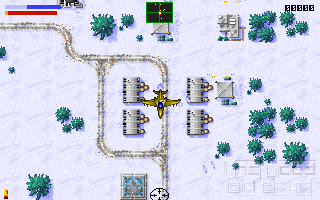 You receive a message from a man that wants to meet you outside the city, he warns you to get your family out of the city as soon as possible and then contact him. Later, while heading home, you witness the city where your wife and baby are vanish in a atomic explosion. Now you must find the man and get revenge for what happened to your city and loved ones.

This game is an overhead shooter and you can move in any direction with keyboard and joystick support. Game play involves shooting the enemy and bombing defended targets, bomb all the targets to win the campaign level and you have different ships to choose from and you can even choose to fly the enemy ships.

Armor, fuel, acceleration, and the amount of weapons you can carry depends on the ship you choose. The weapons to choose from are missiles and a few different kinds of bombs. If you need to refuel and rearm then you can land at any friendly base landing pad. There are two special modes: shadow and escape. Shadow can be used to become invincible and escape is used if you need to get away from the enemy quick, both modes use up fuel so don't use it too much.

More of the story is told if you play the first level and continue to play them in order, there are 8 levels to play. The graphics look great and I think it helps the gameplay. The music and sound effect are great too, there are three choices for sound: Gravis Ultrasound, Sound Blaster and Adlib, the music tracks are different between Sound Blaster and Gravis Ultrasound, but Adlib is almost the same as Sound Blaster. The game needs a boot disk to play on computers or you can use Dosbox.