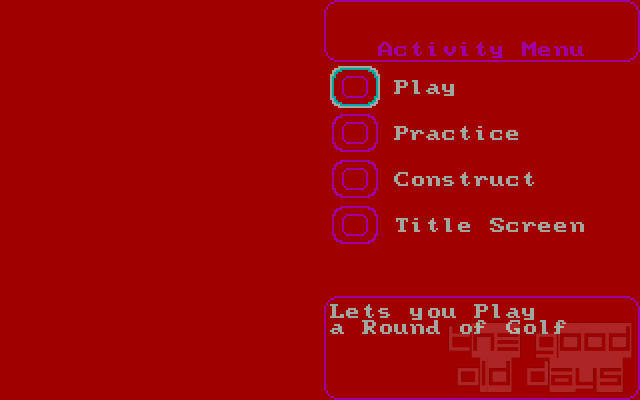 Though this game was published by EA, it was created by Evan & Nicky Robinson and Paul Reiche III. When this game came out, EA hadn't yet started making their own games, they only published. Well, enough with the history lesson, on to the review!

As the title kind of gives away, it's a golf simulator. You can play solo, with up to 4 players (normally or competitively) and against a computer opponent. Even though it's called "world tour", almost all golf courses available seem to be in the Netherlands, and none of the others are outside Europe. I have no idea if the courses are realistically modelled or not, as my personal real-world-golf experience is, I think, just under an hour total. The readme makes mention of having to have the floppy disk in your a: drive as copy protection, but that doesn't seem to be an issue, as running start.bat starts the game just fine.

You get a nice title screen, with pc speaker music (the only place in the game you seem to get music, so enjoy it while it lasts), then you can set a bunch of options and start the game on the course of your choice. You view a score card first, and then you get an overview of the course on the left side of the screen and your player on the bottom right, with status on the top right. And there's where it gets nasty. The golf course is in 4 colours. None of those 4 is (in my admittedly limited experience) normally present on your run-of-the-mill golf course. So, you see a course, and you really have no idea if that pink-splotch-on-the-left is water, sand, grass or maybe your caddy. Also, you seem to have to press enter twice to determine where your ball goes, on a circle with some resemblance to a pie chart. It has different colors, but, again, what do they mean? No clue. I assume the game came with a manual at some point, but of course no such thing is present now. Also, I don't think many people would want to actually have to read what, in a sim game, the terrain is supposed to be. Even if I can't make heads or tails of it, the game seems to try to achieve a bit of pseudo-3d. You can rotate around your golfer with the arrow keys to see the lay of the land, (not freeform, a bunch of predetermined positions, but still) there are some mountains in the distance (and we barely even have hills in the Netherlands, so where did they come from?) and you always see your position relatively recognizably on the map.

So, time to try to hit some golfballs!

First hit veered off rather sharply (in my mind) to the right. Okay, so, let's try to get it back on course. Try for the left...oops. My golfer started cussing (censored, but still) and the game called me an imbecil. Goodie. Next hit, same deal. Ouch. Maybe I should try practice mode first. Same deal. Practice mode seems to only lack a scorecard, and otherwise it's the same as normal if you try a golf course. A tutorial would have been nice. Also, the game seems to respond rather slowly to my enter pressing, so aiming anywhere on that pie chart is tricky...at best. You can practice driving and putting in separate practice modes, but without instructions you might as well just go for the real holes.

Right, let's try to get back to the more positive notes. The game seems to have a lot of options and such to set, which I suppose is a good thing. It also (and thats a very good plus) comes with it's very own level editor! (and you didnt see that kind of thing that often in 1986). Unfortunately it's just as intuitive as the rest of the game, which is to say, not at all. My changes didn't really seem to work. I have no idea how to save it, or what the controls are. After some fruitless messing about, I quit the editor, to see if there's anything I skipped. Yep, a very weird button on the main menu. It takes you to the title screen, which displays the game title and the aforementioned music, and then automatically puts you back in the main menu. Weird! The only reasons I can think of for this is that it kind of works like a credits screen (the names of the game makers are there) or maybe that it's a part of the only way to properly close the game. Which, by the way, is almost like a Street Fighter II combo move. From a golf game it's: esc, esc (till you're in the title screen), down, down, down, enter, wait till the press q to quit is displayed at the end of the screen, then q. Kind of feels like I missed a "high kick" in there somewhere.

There's more weirdness: some text in the game seems to be Spanish, some English and some Dutch. Mostly English.

Right, time for the final verdict. I'm going to give this game the benefit of the doubt, with a manual I assume it's all a lot clearer.

The bad: Music is barely present, sound effects are kind of crappy. Graphics could have been decent, but are completely uninterpretable without a manual. There is no tutorial, yet the game calls you an imbecil if you mess up. Languages get used through each other. Also (small flaw, I know, but it just bugs me) mountains in every background. No explanation of the controls, and sometimes very roundabout ways of doing things.

The good: Once you get it all figured out, the game has a lot of options, and is surprisingly in-depth. It keeps stats, lets you make your own courses, has an AI opponent with difficulty settings (or at least handicaps) and has multiplayer.

I'll give it a 3/6, not because any individual component gets 3/6, but because the average of all those 1/6 and 4/6 parts is 3/6 (rounded up for aforementioned benefit-of-the-doubt).