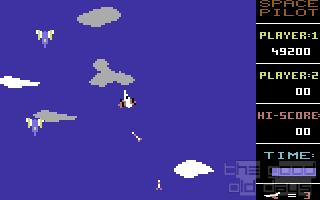 [Mr Creosote] Following Elwood's suggestion, we'll be discussing Space-Pilot today. He has got a special relation to the game - maybe you want to explain this yourself?

[Elwood] Ok... it was Christmas, let's say around 1987. My present back then was a C64 with a datasette and 2 or 3 games. One of these was Space-Pilot (another one, by the way, was P.C. Fuzz)... Back then, I played the game constantly - ironically, my mother did, too. I should add that my mother had never played a computer game before and after this one, maybe a round of Mah Jongg at best.

[Mr Creosote] Our “first” games will always have a special place in our hearts, of course... the story about your mother is strange, though, because the game can hardly be called newbie or even women friendly: It is an unofficial port of the arcade game “Time-Pilot”.

[Elwood] Yes, that is very atypical for my mother, but she was actually up to this one. Concerning beginner friendliness, the gameplay is at least quite simple. You'll learn how to play very quickly and exercise definitely helps your progress.

[Mr Creosote] So what is it all about? Without any explicit plot or particular reason, you're flying your jet through five different time zones and shoot down enemies appropriate to the period.

[Elwood] I seem to remember some kind of vague backstory... I believe the reason for this funny shooting and time travel escapade is the attempted rescue of other pilots. For the typical arcade kiddie, these are only a source to get some additional points which they can collect.

[Mr Creosote] At least in the first four epochs, you can “collect” parachutists to increase your score. It's a pity, though, that there isn't the slightest bit of danger of killing them accidentally. That would have made this feature a little more interesting. What did you think about the different kinds of enemies?

[Elwood] I remembered the game as being easier... more than anything else, though, I thought there were larger differences. Starting with 1970, thoough, it becomes really exhausting: homing missiles enter the picture. These are much more of a problem than the actual enemies.

[Mr Creosote] Yes, the actual enemies are all rather similar: Biplane, helicopter or ufos - it's basically just the sprite which changes and the speed is slightly different. Their weaponry also isn't that different. Sure, the homing missiles are more dangerous, but normal missiles and bombs are effectively the same.

[Elwood] Well... bombs are just falling downwards and you can shoot them more easily. In addition to the differences you mentioned, there is also agility. At least I think so... the helicopters can change their direction more quickly, so can the ufos. But maybe I'm just imagining this. The other planes always have to turn slowly.

[Mr Creosote] Concerning the difficulty level: I can hardly judge this. The game is too hard for me, but this is true for most action games. What I like is that the trajectory of the enemies doesn't seem to be completely random. Some basic formations are adhered to.

[Elwood] May I interject here and ask - because I think this is important for the evaluation of the controls - which control method you used?

[Elwood] Okay... With keyboard controls, I'd consider the game pretty much unplayably hard. A joystick is ideal - this time around, I used a Gamepad. That wasn't ideal, either, but worked well enough. I have to confess, though, that I didn't make it to the final level. Back in the 80s, I even managed to finish the game several times - after 2001, it loops back to 1919.

[Mr Creosote] As a reminder: “2001” is the “futuristic” level (the one with the ufos), because the game came out in 1984! Each level ends with a “boss” fight, but that's rather unspectacular: It's just a slightly bigger sprite which you have to hit only five time.

[Elwood] Yes, but I have to correct you on one count: The game came out in 1983, the original game even in 1982. This doesn't change the fact that 2001 is considered “the future”, of course. From today's point of view, this is the past - who doesn't have an ufo in his garage these days? It's funny, though, that even the jets are future technology. Which makes sense, because our little pilot is using such a vehicle and since in 1983, time travel hadn't yet reached commercial distribution status, the game had to start out in the future: 1984, the year when Duran Duran topped the charts with Wild Boys, the VfB Stuttgart won the German football championship - and Konami's home time travel appliance was the bestseller of the Christmas season!

[Mr Creosote] There is no relation to “the” 1984 (meaning the novel), tough. The game takes a pretty modernist stance and gets a strong belief in technology across. Did you figure out the graphical perspective, by the way?

[Elwood] Sure - earth doesn't and didn't exist! You can dive down as far as you want without ever touching or seeing a single tree!

[Mr Creosote] Gravitation exists, though: The parachutists are dropping “downwards”. The perspective the sprites are shown from is also interesting: Flying upwards or downwards, you see them from above - but flying in horizontal direction, you see them from the side.

[Elwood] There certainly is a logical explanation for that. Presumably... a simplification of the physical model in order to increase the fun.

We're talking about classic arcade cabinets here. The controls (which are based on the rotation of the player's vehicle) were quite uncommon at the time.

[Mr Creosote] Yes, usually, you'd just push you joystick in whatever direction you want to fly. I like the model as it is here. So there's only the sound left to talk about now, isn't it?

[Elwood] I can't say much about this as I had turned it off most of the time. I forgot about that once... all I heard then was blops and blops. Did you listen to it more closely?

[Mr Creosote] There isn't a lot more. Very unspectacular. But, as you already mentioned, at least there was still good music being played on the radio at the time

[Elwood] Well, in that year, the legendary song Codo by DÖF was released. That fits somehow... an alien bringing the concept of love to earth.

[Mr Creosote] Let's not forget Major Tom by Peter Schilling: A lone astronaut flies out into space on a mission, but he can never return again.

[Elwood] Let's get back to the actual topic: You thought the game was too hard for you - does that mean it's bad?

[Mr Creosote] No, certainly not. It's simple, but overall well made. On the other hand, I'm missing original ideas and variety.

[Elwood] There, I have to mention the controls again. That was original at the time!

[Mr Creosote] Ok, but my verdict is based on how well I like the game today. That is why I have to conclude: Space-Pilot is solidly middle-class, but not more.

[Elwood] Yes, I can agree with that. Even by today's standards, this game is still good. You can just pick it up for a quick round during your lunch break.

For the time, it's also not so bad technically.

[Mr Creosote] You mustn't expect more than a “quick round” - but for that, we recommend the game! 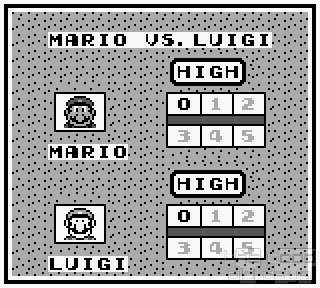