Ringworld: Revenge of the Patriarch
for PC (DOS) 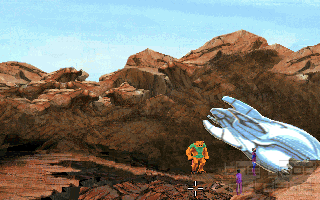 Ringworld, based on the book of the same name, is a science fiction graphical adventure that serves mostly as a small initiation into the world of Larry Niven. But apart from that, it's an enjoyable game.

I must say that from the “the Known Universe” stories I have only read Ringworld, the one which this game is based on. It's a good space opera story, where they explore a megastructure so huge that the human mind can't hope to understand it's size, a ring shaped world built around a sun by unknown aliens.

Now, the game takes after the book, and you start trying to know what happened to two of the characters, a human explorer and a Kzint, some sort of violent humanoid tigers, who went missing after getting the design for the fastest ship both species have ever known, which was created by the manipulative yet ridiculously cowardly Puppeteers.

When the game starts that ship has already been built. Or at least the main structure is working, and is prepared for the test flight. Of course something goes really bad, that being that a Kzinti patriarch has built in secret another of these ultra-fast ships. But while the first is made for exploration, this one carries a canon capable of destroying worlds, and his objective is destroying the Puppeteers, ending this way all their schemes, and then, as his ancestors did, spread war all around the universe.

As you can imagine, you objective is stopping him. How? Well, searching the ringworld for ancient artifacts. Why? Well, because the ringworld is cool, I suppose.

Actually, the plot is a bit flimsy. You flee to the ringworld, because nobody will find you here, and to find the main characters of the book. But it's just that sometimes the game doesn't seem to be sure what this is all about and you end just jumping from place to place, and then suddenly saving the Puppeteers.

It's all too fast and short. Yet, apart from that the game is good. All the puzzles can be solved in a logical way, not being so hard that you will need a guide, or so easy that they aren't even puzzles. And some nice details, like having an encyclopedia on the main computer, make the game enjoyable.

The bad, again, is that this seems more like a showcase of Larry Niven's universe. But still, it's a short and fun showcase.

Mr Creosote:
Although this is indeed quite a short and easy game and relatively unspectacular, it's by no means a bad one. I recommend it, but be prepared for some... unusual design choices.
Wandrell:
Feel free to share anything about Ringworld: Revenge of the Patriarch (1992) here!
[Reply] 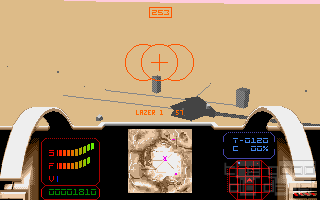